The Bear and the Nightingale by Katherine Arden 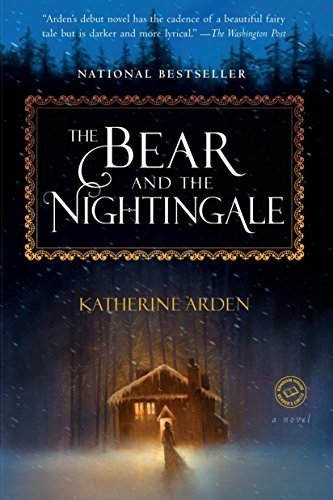 About the Author – Honestly I could try to recap Katherine’s bio, but her own telling is fascinating so just go to her website and read it! http://www.katherinearden.com/about. The Bear and the Nightingale is her first novel, one that’s been written and revised all over the world. I love that – her serious case of wanderlust and the fact that this truly seems to be a labor of love.

About the Book – This novel reads like a classic Russian fairy tale. Vasilisa (Vasya), a young girl who lives in Northern Russian has the ability to communicate with the spirits that inhabit her home and land. Her unique connection with the wilderness baffles her family and they try in turn to punish her, leave her be, and protect her. When a priest (and a new stepmother) eventually come to stay, they turn the community away from their traditional offerings to the spirits, causing them to weaken. A threat only spoken of in the family’s fairy tales begins to take form and the local spirits and Vasya must attempt to protect their village.

My Thoughts – Every time I picked up this book, I felt whisked away from reality into this magical Russian wilderness. It’s reminiscent of a classic fairy tale, but written with modern pacing and language. Part of the appeal is that I just haven’t found many novels like this. (Side note – if you’re looking for something similar I highly recommend similar trying out The Snow Child by Eowyn Ivey). The characters in this novel are well developed and the descriptive writing sets the scenes beautifully. There’s also underlying judgement on religious zeal, superstition, and societal pressures to fit in that could easily apply to modern times. Supposedly this is the first in a trilogy, so I’m hoping for the same qualities in the next two books!

1. A constant theme throughout this book are Vasya’s clashes with her family and villagers. Should she have tried harder to assimilate into her community? Would that have made her life any easier?

You can easily find positives and negatives to both sides of this answer. On one hand, if Vasya wasn’t such a self-inflicted outcast, she might have had more influence when Konstantin came to town and swayed everyone’s beliefs. In turn, this would have kept up the strength of the various chyerti (local spirits). Thus, preventing the Bear from growing stronger.

On the other side, there are obviously some serious issues with this society. Often Vasya is dismissed or scolded for her actions and beliefs simply because she is a woman. Since they don’t understand her or agree with her, they call her a witch and essentially shun her. With that sort of attitude, there’s not much appeal for fitting in with them.

2. What do you think would have happened if the marriage to Kyril took place?

Honestly his character scared me more than any of the others. The brief flashes of anger and his actions toward Vasya had me terrified that she would have to actually marry him. You just knew there was violence brimming under the surface. I’m sure he eventually would have broken her spirit and drowned out the wildness that made her such a compelling character. I wonder though, if her marriage would have kept the Bear from having a chance to escape. The only reason Konstantin gave us Anna as a sacrifice was to get Vasya back. If Vasya was already married, there would be no motive for Konstantin. The whole direction of the story would have changed, maybe for the good of the village. It sure would have been a depressing end for the readers, though!

3. Which of the various spirits that Vasya encounters is your favorite?

The domovoi (household guardian) is the one I’d most want in my house. He gave Vasya courage and acceptance and tried so hard to keep the family safe from the upyry. He barely asked for anything in return as well, just her presence and bits of food. I thought the rusalka was fascinating, though. The concept that she must keep her hair wet to stay alive is clever and unique. Plus, she is a bit snarky which is always a bonus!

4. Were you satisfied with the ending?

Absolutely yes. It was heartbreaking that her father died, but his sacrifice showed how much he loved and believed in his first wife and their daughter. Normally I don’t enjoy ambiguity or open endings, but the last sentence was the perfect way to wrap up this story. I’m still looking forward to the second book in the series, though! I’m hoping she continues this strange relationship with Morozko, the demon of winter, too!

Answer the questions or add your own thoughts about The Bear and the Nightingale in the comments!