Now that we’ve reached the halfway point of the year, I see a few fellow book bloggers are posting their favorite books of 2018 that they’ve read so far. It sounded like fun, so here we go. I’m up to 58 books read this year as of today. I’ll admit I cheated and included the first week of July because I couldn’t not put Us Against You on this list!

I read this in just over 12 hours and can’t stop recommending it to everyone! A small town devoted to their hockey team is rocked to its core when one of the players commits an unspeakable crime. The townspeople are divided in their support and irrevocable damage is done.

Us Against You by Fredrik Backman

Yes, Fredrik Backman deserves two spots on this list. He’s a masterful writer who captures human emotions, feelings, and reactions in a way that’s hard to properly describe. His stories are intricate and real and appeal to everyone. The Beartown characters are back and the story picks up immediately where Beartown left off.

Eleanor is about as quirky as they come. A socially awkward single accountant with a lunatic mother. While it took some reviewers a bit to get into this book, I adored it from the very first pages. Check out my book review here!

A Court of Mist and Fury by Sarah J Maas

The second book in the Court of Thorns and Roses series is a slim favorite. Do yourself a favor and read all three though. It’s escapist fantasy at its best. While the writing and plot aren’t perfect, this series sweeps you off your feet and engrosses you in another world in a way I haven’t experienced more than three or four other times.

Hot tip – for some unknown reason this gorgeous hardcover is only $5 on Amazon! I bought it even though I don’t have the other books in the series yet ha. 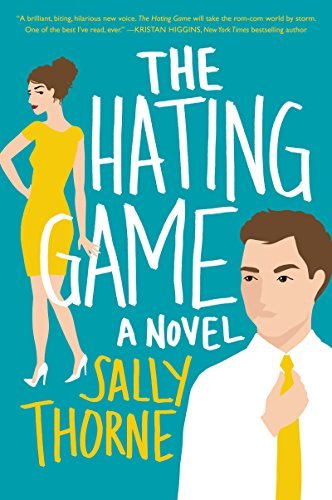 The Hating Game by Sally Thorne

I happened upon this book on Scribd and thought the premise sounded highly entertaining. A workplace comedy about two coworkers who absolutely detest each other, literally playing games with the sole point of proving who hates the other more. When they end up vying for the same promotion, they start to realize maybe there’s more to their relationship than just animosity. This was a ton of fun and I flew through it in a few days. Now, I’m eagerly awaiting Thorne’s next novel!

As You Wish: Inconceivable Tales from the Making of The Princess Bride by Cary Elwes

Cary Elwes narrates the audiobook, which makes this memoir even more charming. He makes the whole process of making this movie sound incredible and tons of fun. I also enjoyed hearing from a few of the other cast and crew. I’m eager to go back and rewatch the movie now after hearing all the behind the scenes info.

The Almost Sisters by Joshilyn Jackson

Leia is enjoying her life as a comic book artist…until she discovers she’s pregnant after a one night stand with Batman. Plus her Southern grandmother’s health is failing and now her sister is on the verge of divorce. There’s a ton of story lines in this one, but it Jackson blends them together into a beautiful family drama. I wrote a gushing full review of this one over on Literary Quicksand.

The Lies of Locke Lamora by Scott Lynch

Jay convinced me to read this after a hefty dose of initial skepticism on my part. Locke is a young man who earns his living stealing from the rich in a cutthroat town. His schemes are impressively clever and he’s one of those questionable characters you just can’t help but adore.

The Snow Child by Eowyn Ivey

I adore this retelling of a Russian fairytale. A childless couple moves to the Alaskan wilderness to start a new life as farmers. When the wife first catches glimpses of a young girl during the winter, her husband and neighbors think she’s going crazy. As the story progresses and the child becomes a part of their lives, this crosses over into delightful and tear-jerking magical realism.

A second nonfiction pick! Bet you didn’t think you’d see that happen. I really should try to read this genre more often because it has fascinating things to teach us! In particular, this book is a winner for that unique class of readers who love books and statistics.

What is your favorite book you read so far this year?

Check out my ultimate list of All The Books I Read in 2018 and my Favorite Books of 2019 so far too!

*Disclosure – I receive a tiny commission for any items purchased through the links on my site. The price doesn’t change so thank you for supporting my book blog!