Learn more about fact vs fiction with these historical fiction / nonfiction book pairings!

I tend to suggest reading the historical fiction book first and then following it up with the truth in the nonfiction book pair. To me, it’s more fun to get lost in the novel and then be brought back to reality.

The Memoirs of Cleopatra / Cleopatra: Last Queen of Egypt 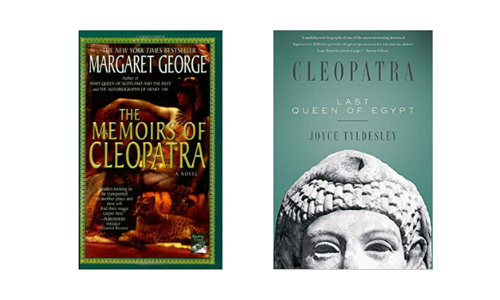 Summary: Told in Cleopatra’s own voice, The Memoirs of Cleopatra is a mesmerizing tale of ambition, passion, and betrayal in the ancient Egyptian world, which begins when the twenty-year-old queen seeks out the most powerful man in the world, Julius Caesar, and does not end until, having survived the assassination of Caesar and the defeat of the second man she loves, Marc Antony, she plots her own death rather than be paraded in triumph through the streets of Rome

Summary: In Cleopatra, Egyptologist Joyce Tyldesley offers an unexpectedly vivid portrait of a skillful Egyptian ruler. Stripping away our preconceptions, many of them as old as Egypt’s Roman conquerors, Cleopatra is a magnificent biography of a most extraordinary queen.

The Romance of the Three Kingdoms / China: A History 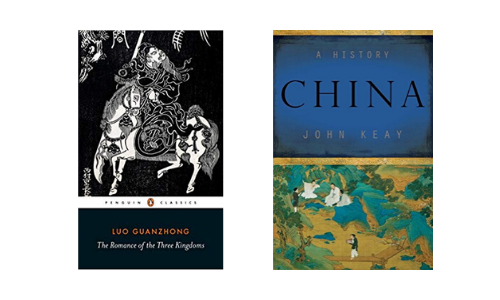 Fiction: The Romance of the Three Kingdoms
Author: Luo Guanzhong      Published: Written over six centuries ago

Summary: An epic Chinese novel set during the Han dynasty that dramatizes the lives of feudal lords and their retainers, recounting their personal and military battles, intrigues, and struggles to achieve dominance for almost 100 years. Part historical record and part legend, the novel covers the turbulent final years of the Han dynasty when China broke into three competing kingdoms, and delves into the politics of war, power, and diplomacy.

Summary: John Keay has composed a vital and illuminating overview of the nation’s complex and vivid past. Keay’s authoritative history examines 5,000 years in China, from the time of the Three Dynasties through Chairman Mao and the current economic transformation of the country.

The Other Boleyn Girl / The Six Wives of Henry VIII 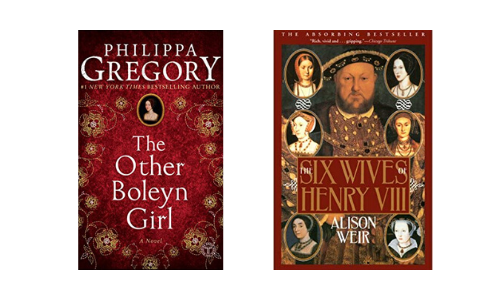 Summary: When Mary Boleyn comes to court as an innocent girl of fourteen, she catches the eye of the handsome and charming Henry VIII. Dazzled by the king, Mary falls in love with both her golden prince and her growing role as unofficial queen. However, she soon realizes just how much she is a pawn in her family’s ambitious plots as the king’s interest begins to wane, and soon she is forced to step aside for her best friend and rival: her sister, Anne. With her own destiny suddenly unknown, Mary realizes that she must defy her family and take fate into her own hands.

Summary: The tempestuous, bloody, and splendid reign of Henry VIII of England (1509-1547) is one of the most fascinating in all history, not least for his marriage to six extraordinary women. In this accessible work of brilliant scholarship, Alison Weir draws on early biographies, letters, memoirs, account books, and diplomatic reports to bring these women to life.

Outlander / Jacobites: A New History of the ’45 Rebellion 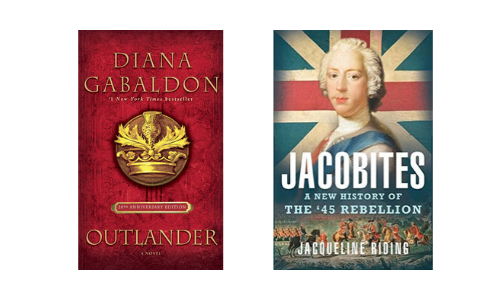 Summary: Scottish Highlands, 1945. Claire Randall, is just back from the war and reunited with her husband on a second honeymoon when she walks through a standing stone in one of the ancient circles that dot the British Isles. Suddenly she is a Sassenach—an “outlander”—in a Scotland torn by war and raiding clans in the year of Our Lord . . . 1743. She quickly learns her only chance of safety lies in the hands of young Jamie Fraser.

Summary: The tale of Charles Edward Stuart, “Bonnie Prince Charlie,” and his heroic attempt to regain his grandfather’s (James II) crown–remains the stuff of legend: the hunted fugitive, Flora MacDonald, and the dramatic escape over the sea to the Isle of Skye. But the full story–the real history–is even more dramatic, captivating, and revelatory. 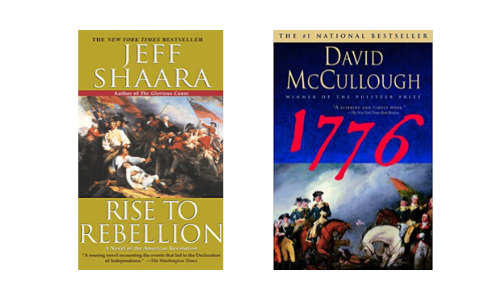 Summary: More than a powerful portrait of the people and purpose of the revolution, Rise to Rebellion is a vivid account of history’s most pivotal events. The Boston Tea Party, the battles of Concord and Bunker Hill: all are recreated with the kind of breathtaking detail only a master like Jeff Shaara can muster. His most impressive achievement, Rise to Rebellion reveals with new immediacy how philosophers became fighters, ideas their ammunition, and how a scattered group of colonies became the United States of America.

Summary: In this masterful book, David McCullough tells the intensely human story of those who marched with General George Washington in the year of the Declaration of Independence—when the whole American cause was riding on their success, without which all hope for independence would have been dashed and the noble ideals of the Declaration would have amounted to little more than words on paper.

The Kitchen Boy / Nicholas and Alexandra

Summary: Drawing from decades of work, travel, and research in Russia, Robert Alexander re-creates the tragic, perennially fascinating story of the final days of Nicholas and Alexandra Romanov as seen through the eyes of their young kitchen boy, Leonka. Now an ancient Russian immigrant, Leonka claims to be the last living witness to the Romanovs’ brutal murders and sets down the dark secrets of his past with the imperial family.

Summary: Robert K. Massie sweeps readers to the extraordinary world of Imperial Russia to tell the story of the Romanovs’ lives: Nicholas’s political naïveté, Alexandra’s obsession with the corrupt mystic Rasputin, and little Alexis’s brave struggle with hemophilia. Against a lavish backdrop of luxury and intrigue, Massie unfolds a powerful drama of passion and history—the story of a doomed empire and the death-marked royals who watched it crumble. 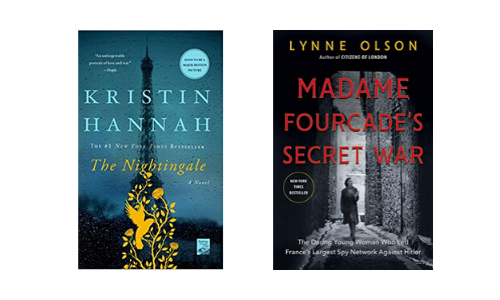 Summary: The Nightingale tells the stories of two sisters, separated by years and experience, by ideals, passion and circumstance, each embarking on her own dangerous path toward survival, love, and freedom in German-occupied, war-torn France―a heartbreakingly beautiful novel that celebrates the resilience of the human spirit and the durability of women.

Summary: In 1941 a thirty-one-year-old Frenchwoman, a young mother born to privilege and known for her beauty and glamour, became the leader of a vast intelligence organization. No other French spy network lasted as long or supplied as much crucial intelligence. In this dramatic account of the war that split France in two and forced its people to live side by side with their hated German occupiers, Lynne Olson tells the fascinating story of a woman who stood up for her nation, her fellow citizens, and herself.

Are there any other historical fiction and nonfiction book pairs you’d add to this list? Do you have a favorite time period to read?