February Book Recommendations: What to Read & What to Skip

Today’s roundup of February book recommendations includes a wide variety of genres and ratings. My two five star books just happened to be the only physical books I read. Guess it’s a good thing I own them now! I can definitely see myself rereading both.

The most difficult book to rate was The Starless Sea. It was released late last year and I’ve mostly heard glowing reviews. However, I struggled getting through the last third and flat out didn’t like the ending. Tell me what you thought!!

My other February book recommendations fall somewhere in the middle. I hope you find something to add to your To Be Read list!

If you’ve read any of the books in my mini book reviews below, let me know in the comments if you agree with my rating!

I’m linking up with Jana Says /Life According to Steph and Modern Mrs Darcy as usual to share what we read this month!

*Disclosure – I earn a small commission for any items purchased through the links above at no extra cost to you. Thank you for supporting my book blog!!

A renaissance faire, a bookstore, a slow burn romance! What more could you want?? This book easily jumped to the top of my list of contemporary romances. Emily reluctantly agrees to volunteer at a local renaissance faire and has no idea why one of the organizers, Simon, seems to hate her. The two constantly clash during prep for the event. However when the Faire starts, their new identities indulge in an unexpected flirtation. 5 Stars

A Night to Remember by Walter Lord

I first came across this book when researching narrative nonfiction books. Then happened upon it at a book sale not long after. It’s an incredible read that shares a minute by minute account of the night the Titanic sank. It was written decades ago, so the rich history is based on survivors’ accounts. This is a great read for nonfiction lovers and those not used to the genre. It’s short, but impactful.  5 Stars

The Little Bookshop on the Seine by Rebecca Raisin

When a quiet American bookstore owner switches place with one of her bookseller friends in France, she thinks it will be an experience straight out of her beloved novels. Reality is quite different, though. The Paris bookstore is facing decreasing sales, endless issues with staff, and it’s tons and tons of work. I enjoyed the behind the scenes peek at the difficulties of running a bookstore. Overall, a cute read but not a ton of depth. 3.5 Stars

I admittedly wasn’t the biggest fan of Station Eleven, but I wanted to give her new release a shot. Thankfully I did!! The Glass Hotel is difficult to describe, but it mainly focuses on a group of individuals who are connected through a complicated financial scheme. A hotel located far from civilization serves as the impetus for their pivotal introductions to each other. It’s an intriguing take on a very real life con game and the various reactions of those involved. 4 Stars

Children of Blood and Bone by Tomi Adeyemi

This is the YA fantasy I needed at this point in my reading life. Just when they all started to run together, I dove into the world of African myth and magic. All of the standard YA fantasy tropes can be found here, but the setting and culture set it apart. There were some circumstances and romances that weren’t entirely believable, but the unique aspects land it at four stars. I’ve heard the sequel isn’t nearly as good though, so I think I’m stopping here. 4 Stars

The Friend Zone by Abby Jimenez

An impulse purchase that led to a deeply emotional read! Kristen is a straight talking woman with infertility issues who’s currently planning her best friend’s wedding. That’s how she meets Josh – the best man and all around amazing human. Except, she has a boyfriend and he won’t stop talking about how much he wants kids. They decide to stay friends despite the undeniable attraction.

When tragedy strikes, she’s forced to decide if she can accept his love. This is at times an extremely tough book to read if you’re a mom or want kids. I was a bit put off by Josh in the beginning, but he grew on me. By the end, I was so emotionally invested I was sobbing on the couch. 4.5 Stars

Regretting You by Colleen Hoover

My second Colleen Hoover of the year! I think I’ve found a new favorite author. She has a way of surprising you by taking books in unexpected directions. Regretting You starts off as a teen love story, but quickly morphs into something much more mature. As the adults try to handle unbelievable circumstances, the teens tackle their own issues. I don’t want to give much away, so it’s better going into this one blind. Bonus – it’s currently available for free with Kindle Unlimited! 4 Stars

Pin this for later! 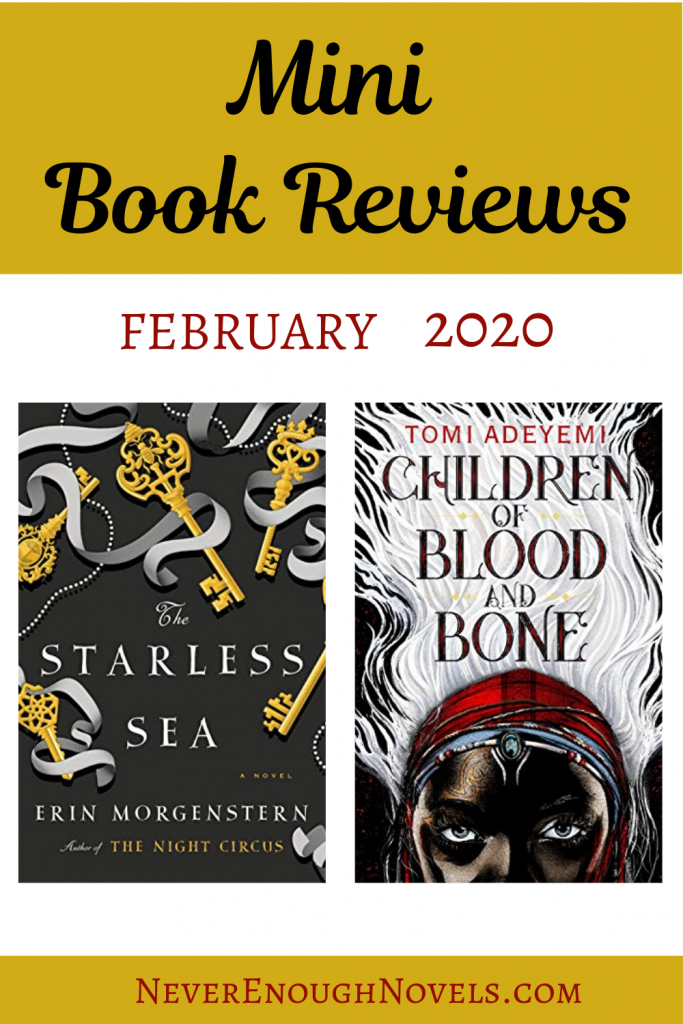 The Starless Sea by Erin Morgenstern

Wow – My thoughts on this book jumped ALL over the place. Listening to it on audio was certainly a unique experience, especially with the full cast of characters. For a long time I was completely entranced. The old fairy tales, a secret underground world full of books, a dangerous society trying to protect it. It all added up to an intriguing story.

Then it started to go off the rails. As I got closer to the end, more questions were raised than answers and it felt like Morgenstern was dragging out the narrative unnecessarily. By the final chapter, I was pissed. There were so many things left unaddressed! For me, it ended up feeling like a waste of time. Maybe I missed something? Or it’s just the fact that I hate ambiguity. Regardless, this five star read fell to a two star by the end, so ultimately it will sit in the middle. 3.5 Stars

Since I created my Reading Tracker, I thought it’d be fun to showcase a few of the graphs each month. I’m an accountant, so books + Excel is my dream combo 🙂

Up first is a graph that shows the average star rating by genre. So far, the only genre holding a 5 star average is Science Fiction (thanks to The Martian)! We’ll see if that continues after I’m done with Recursion. 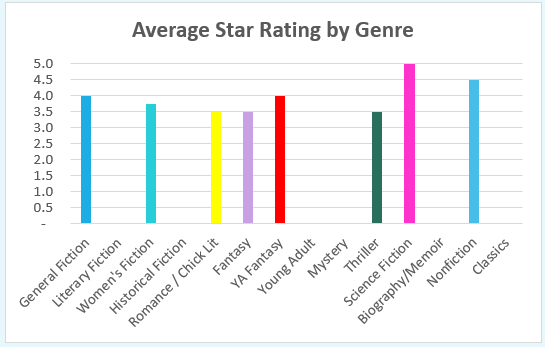 Up next is a pie chart showing the most popular book formats. I’ve never tracked this before 2020, but I didn’t expect to read so many eBooks! We’ll see how it looks later this year. 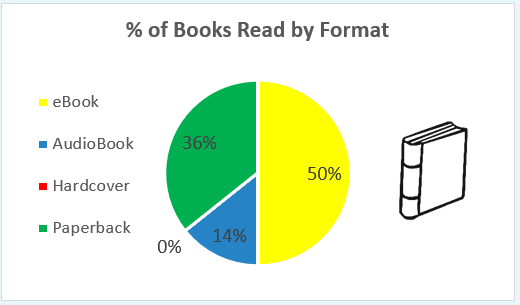 If you’d like to analyze your reading or you’re tired of tracking books with Goodreads, check out my Reading Tracker!

For more mini book reviews, check out What I Read in January 2020!