As I’ve previously mentioned on the blog, Stephen King is one of the few writers that Jay and I both love. Just recently we each compared our Top Five Stephen King books. In our home, we’re amassing an impressive collection of his books and short stories. So, you can imagine we were both thrilled when his new release, The Institute, showed up at our door! A huge thank you to Scribner Books for sending an advanced copy my way. We decided to buddy read The Institute and share both of our book reviews. It’s a two for one deal today with The Institute book review!

*I earn a small commission if you purchase this book through the links included in this post at no extra cost to you. Thank you for supporting my book blog!

Summary of The Institute:

The Institute is a chilling depiction of how believing in a means to an end can have horrific consequences. One night in suburban Minneapolis, Luke Ellis is kidnapped and his parents are murdered. He’s taken to The Institute, a secret complex that hosts children with telekinetic and telepathic abilities. The kids are subject to inhumane testing and brutal punishment if they refuse to cooperate. As Luke’s friends start to disappear to the Back Half of the building, he realizes he must do whatever it takes to escape before his fate is decided as well. Release Date – September 10, 2019

Rachel’s Book Review of The Institute:

Stephen King is possibly best known for his terrifying novels full of nightmarish creatures, but there’s nothing supernaturally scary in The Institute. The only horrors are the treatment of the children and the suspense of whether Luke will manage successfully escape. King’s writing brings you directly into Luke’s thoughts and feelings, so when he was first struck by one of the caretakers, I felt the shock and disbelief as astutely as if I myself had been slapped. Although it seems impossible in theory that a place such as the Institute could exist, all the logistical details, coverups, and mindsets of the employees feel real. That was the scariest thing about this novel – wondering if something like this could happen.

Another strength of this book is King’s ability to write children. Most of the story is told from Luke’s perspective and King captures a twelve year old’s emotions, thoughts, and reactions like no other. To make this task even more difficult, he adds in Luke’s exceptional intelligence and perfectly balances Luke’s childlike experiences with his brilliant mind. Since the book less than 600 pages, King also keeps the plot moving at a brisk pace, which is not always the case in his other novels. The second half in particular will keep you flipping through the pages to discover the ultimate fate of the kids.

My only minor complaint was the inclusion of a few jabs at President Trump. They felt unnecessary and petty and didn’t contribute anything to the plot. When it happened, it was the only time I felt jarred out of the story and back into real life. I might just be getting tired of seeing political opinions inserted everywhere these days.

Undoubtedly though, this will go down as one of my favorite Stephen King books! It’s essentially an extremely well-written and compelling thriller with a touch of the supernatural. Appealing for Stephen King’s devoted fans as well as those who aren’t usually drawn to his books.

Jason’s Book Review of The Institute:

The first question most people ask about Stephen King’s books is, “Well, is the ending any good?” For The Institute, the short answer is yes. The ending comes together nicely; it makes sense and it feels pretty complete. The very, very end I didn’t care for as much but it didn’t ruin the story for me.

Overall, the book is well rounded. I don’t know if he has a new editor, but whoever it is did a great job making sure this book isn’t too bloated. There are times in his other books where he seems to get stuck in a rut and you just want him to move on. I never really experienced that in this book.

That leads into his pacing. The Institute’s pacing is pretty consistent, which is another issue King has had in previous books. At the same time, this book doesn’t have the same “highs” as his other books but it also doesn’t have the “lows” of other books either. The other huge pro of this book is his ability to write children. This skill is second to none and he proves he’s still got it even 33 years after the release of IT ( probably his best book about kids)

I have two major critiques of the book. One, I thought it was pretty predictable. Around the halfway point I had a pretty good idea of what would happen. Now, that isn’t to say there aren’t twists and turns. There are. Just don’t expect anything too epic.

Second, are his Trump references. In the beginning it’s not bad, just talking about things Trump has done in the news. This is a King staple, referencing politicians, specifically presidents, and what they are doing in the news. However, near the end he took a couple of stabs at Trump and his supporters that added literally nothing to the story, other than just to talk about how he doesn’t like the president. For someone who is as talented at writing as King is, he could have come up with more creative ways to make fun of the president or show his dislike. The way he did it here is just lazy and takes you out of the story. You can tell it’s King talking and not his characters.

Would I recommend this book? Yeah, definitely. I don’t think it’s one of the best books he has ever written, but it’s still very good. If you don’t like his full-blown horror books, it’s great for you. The supernatural occurrences in the book are what’s expected from him. His ability to write children and a turn of phrase is still up there with some of the other King greats. If you have even the slightest interest in this book, just go out and read it.

The Institute Book Review is is my Review of the Month for the review collection on LovelyAudiobooks.info

Do you think you’ll read The Institute? 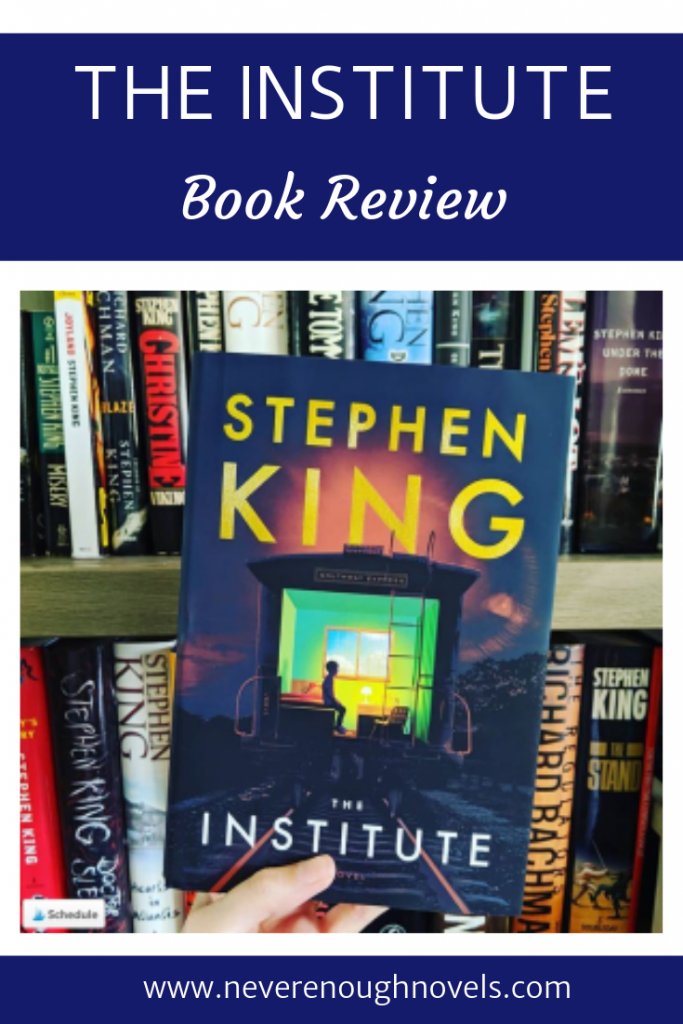