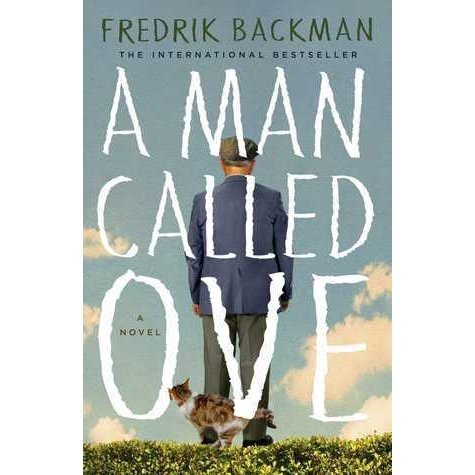 About the Author – Fredrik Backman is a Swedish author, columnist, and blogger. Backman studied comparative religion, but dropped out to become a truck driver. Over the years, he began blogging and freelance writing. His first novel, A Man Called Ove, was published in Sweden in 2012. Since then he has added My Grandmother Asked Me To Tell You She’s Sorry, Britt-Marie Was Here, Beartown, and Us Against You to that list.

About the Book – This is the story of Ove, a quintessential curmudgeon. He’s living a perfectly normal life ruling over his neighborhood when a young couple and their children move in next door and disrupt everything. Through a series of flashbacks we learn about Ove’s past and how he turned in to the grumpy old man he is today. However, his present day interactions with his neighbors begin to change his attitude and his actions. By the end of the story, you’ll wish for an Ove of your own in your life.

1. Backman chose to reveal Ove’s past slowly throughout the book. What was the most surprising or heart wrenching part of his story? Did you like reading in snippets or would you prefer to hear the whole history together?

One of the parts of Ove’s past that struck me the most was the passing of his father (so many tears). They seemed to have such a close relationship and you could feel how much Ove looked up to him. His father essentially shaped his entire character. It was horrible to read about his sudden death, with no opportunity to say goodbye. On a happier note, one of my favorite snippets from the past was the wheelchair ramp he built for Sonia after the accident. It was a perfect example of how Ove’s actions showed more about him than his sometimes gruff exterior.

I enjoyed the mashup of present day events with pieces of Ove’s history. He’s clearly a complex character and it was enthralling getting to know him over time and slowly seeing how he became the person we meet in the first chapter. I think part of the charm of the story would be lost if it was told purely in chronological order.

2. Ove rants and raves many times during the course of his life. Did you find yourself wholeheartedly agreeing (or disagreeing) with any of the situations he was so passionate about?

I loved his rant about the celebration of mediocrity in our society and how people no longer have the skills to do things for themselves (installing a dimmer switch, laying tiles, filing their taxes). Every kid doesn’t deserve a trophy for every single thing they do! It also seems like we’ve become too dependent on others or too busy to get things done. Since we bought our house, I’ve learned a few more manual skills (and thankfully have a husband who can do basically everything else). If he doesn’t know how, he’ll learn and it’s become one of my favorite qualities of his.

3. Besides Ove, who was your favorite member of the supporting cast? What made you like them?

Parveneh and Jimmy’s children were my favorite characters because of their adorable interactions with Ove. They brought no judgement or preconceived notions and accepted him immediately for who he is. They liked him so quickly and easily when many of the other neighbors couldn’t. I also think they played an important role in Ove learning to accept chaos and even slightly enjoy it.

4. Were you satisfied with the ending?

Absolutely yes. I’ll admit, I cried and cried, but it would have felt too perfect and unrealistic if it ended on any other note.

Answer the questions or add your own thoughts about A Man Called Ove in the comments!