I’m finally getting around to recapping the last part of our Ireland trip!! In this section I’ll cover the Giant’s Causeway, the Scottish Isle of Islay, and Belfast. If you’re new here, you can head over to this post to start at the beginning! 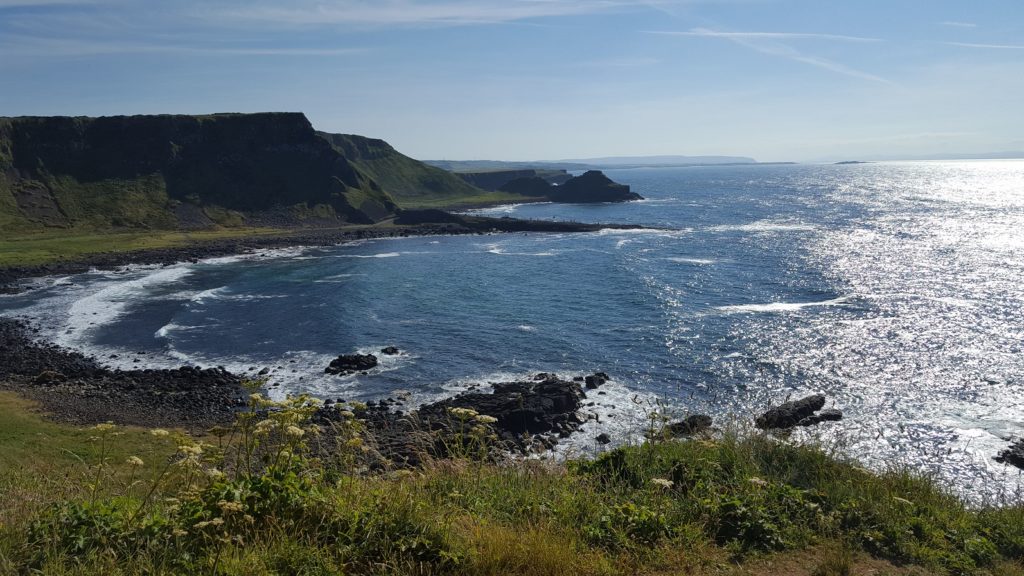 On our second morning in Galway, we packed our bags and set off for Northern Ireland. This would be our longest drive of the trip, clocking in at 5 hours. To break up the journey, we stopped for lunch in Sligo. If we had more time, it would be a terrific place to spend a few hours browsing. There were lots of boutique shops and pleasant streets. However, our goal was a quick lunch so we grabbed sandwiches from the café in the Yeats Building. It just happened to be another literary location : )

Our next AirBnb is located in Ballycastle, but we stopped at the Giant’s Causeway on the way. This natural phenomenon is a collection of primarily hexagonal columns formed from lava. The symmetry is unbelievable and the location is breathtaking. When you arrive, you’ll be directed through the visitor’s center. The 11.50 GBP entrance fee includes parking, access to the visitor’s center exhibits and restrooms, and an audio guide. This audio guide provides an entertaining series of stories about both the geographical history and Irish legends surrounding this place. 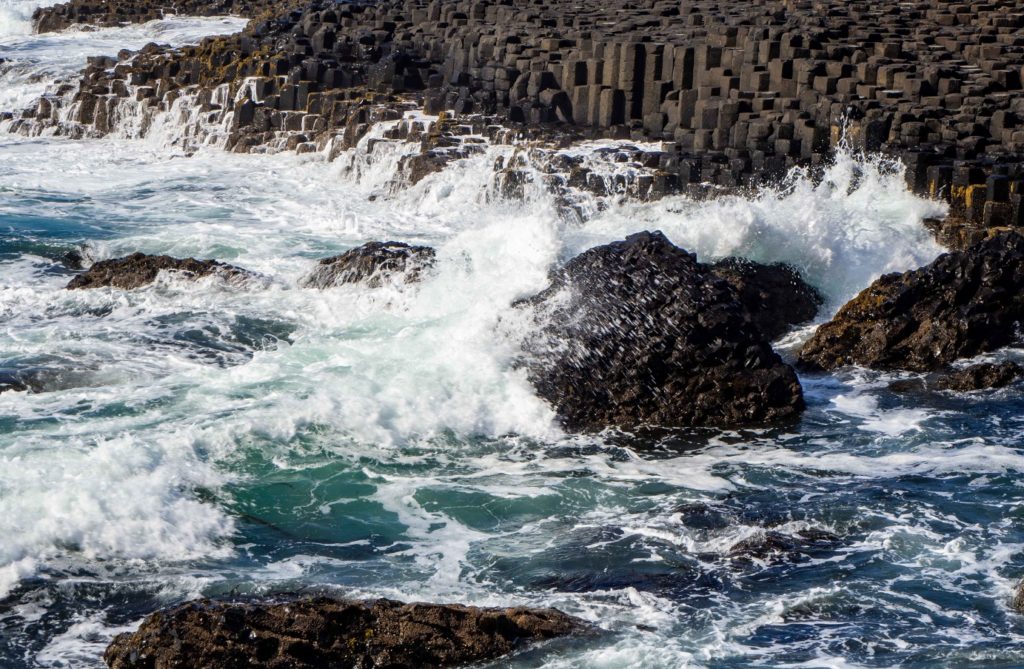 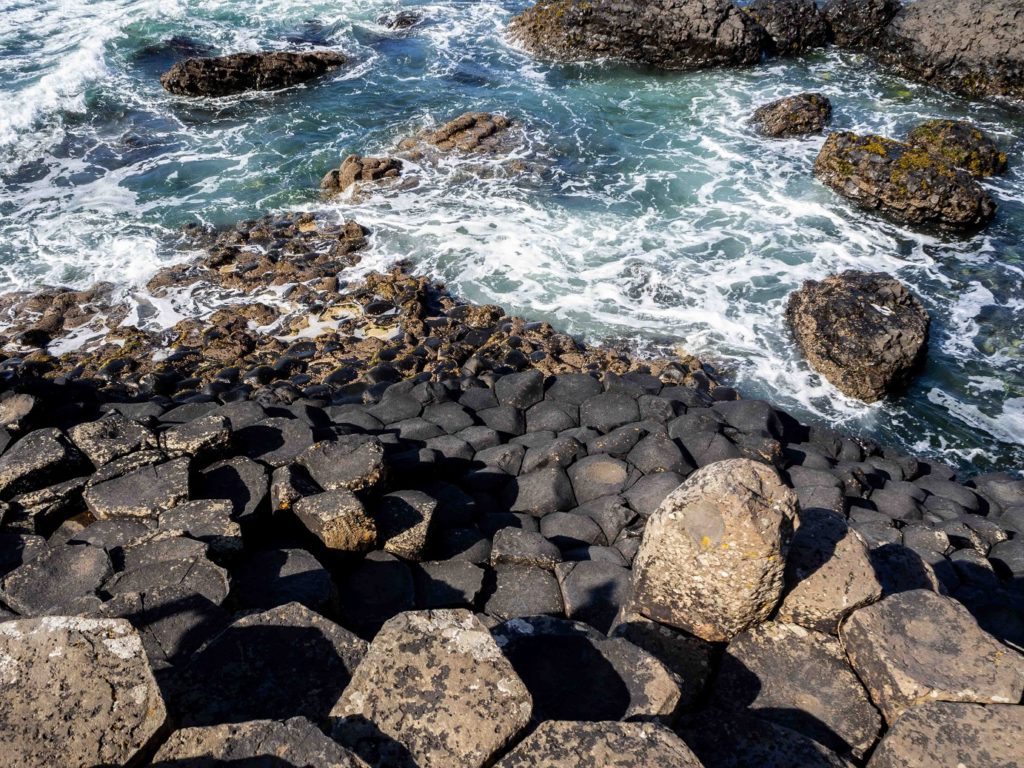 It’s a bit of a hike down to the Giant’s Causeway, but there’s also a bus available for a small fee. Along the way you’ll enjoy gorgeous vistas of the northern Atlantic Ocean. At the causeway, you can climb all over the rocks to your hearts content. For those made of braver stuff, you can also continue down the path and hike up the side of the mountains. A tiny trail with barely any railings leads you to even more beautiful views. I was terrified and admittedly didn’t make it all the way to the top. However, even my view was lovely. In all, we spent a solid two hours exploring the area and listening to the audio guide. It far surpassed my expectations and is absolutely a must-visit if you find yourself in Northern Ireland. 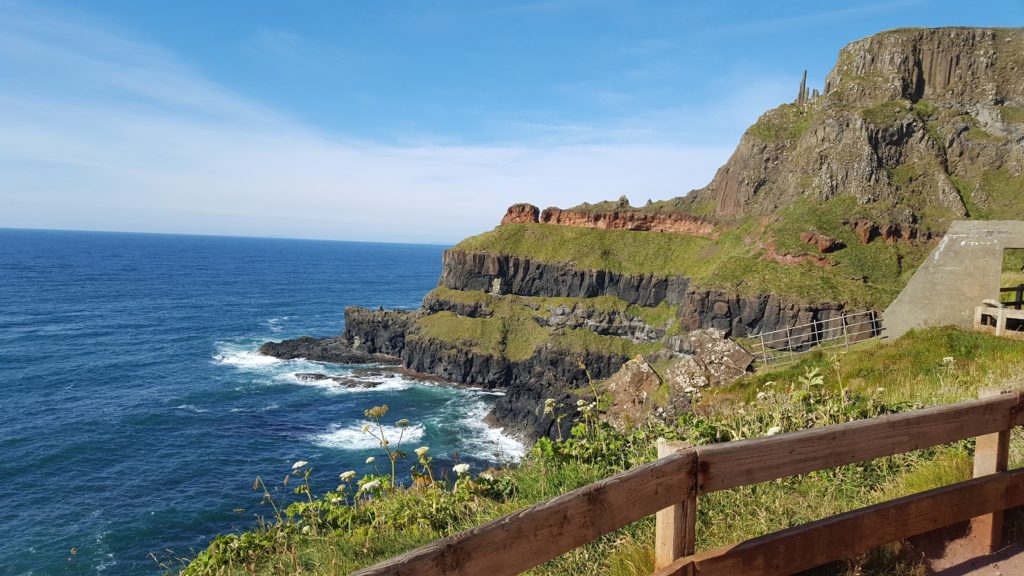 View from halfway up the mountain 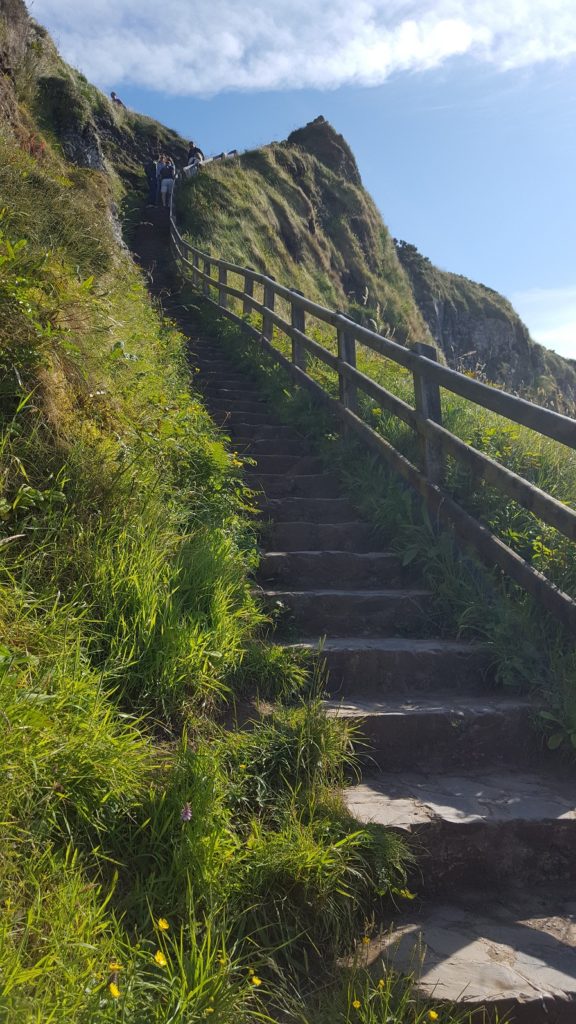 The stairs I refused to climb

From the Giant’s Causeway, Ballycastle is a fairly short drive away. We easily found our AirBnB and settled in for our two night stay. This was probably my favorite place we rented. The two story house was huge and featured massive skylights in each bedroom. There was also a lovely back deck where you could sit and enjoy the yard. It’s also within walking distance of all the shops and restaurants in town as well as the harbor.

When we wandered into town, we ate at one of the few restaurants available without a reservation, The Cellar. This tiny underground establishment only had about ten tables and served delicious food. I had my favorite meal of the trip here, the Cellar Chicken – chicken wrapped in bacon and served over a savory red onion pancake surrounded in a sweet corn sauce. Amazing. The guys also found an adorable local beer featuring a Puffin on the label. Win win haha. We called it a night after dinner and meandered back to our AirBnB, knowing we’d need to get up early for our trip to Scotland the next morning!!

Bright and early the next morning (ok ok, it was only 9am), we made our way down to the harbor to find our ferry to the Scottish Isle of Islay! Kintyre Express runs a daily ferry between Port Ellen on Islay and Ballycastle. The round trip fare was over $100 but there are practically no other options for visiting one of the isles from Northern Ireland. The Kintyre boats are quite nice at least, featuring comfortable raised seats to allow for excellent viewing of the journey. It’s approximately an hour and a half from Ballycastle to Port Ellen on Islay and there is only one departure and return time each day. Unfortunately, that left us only about four hours on the island to explore. 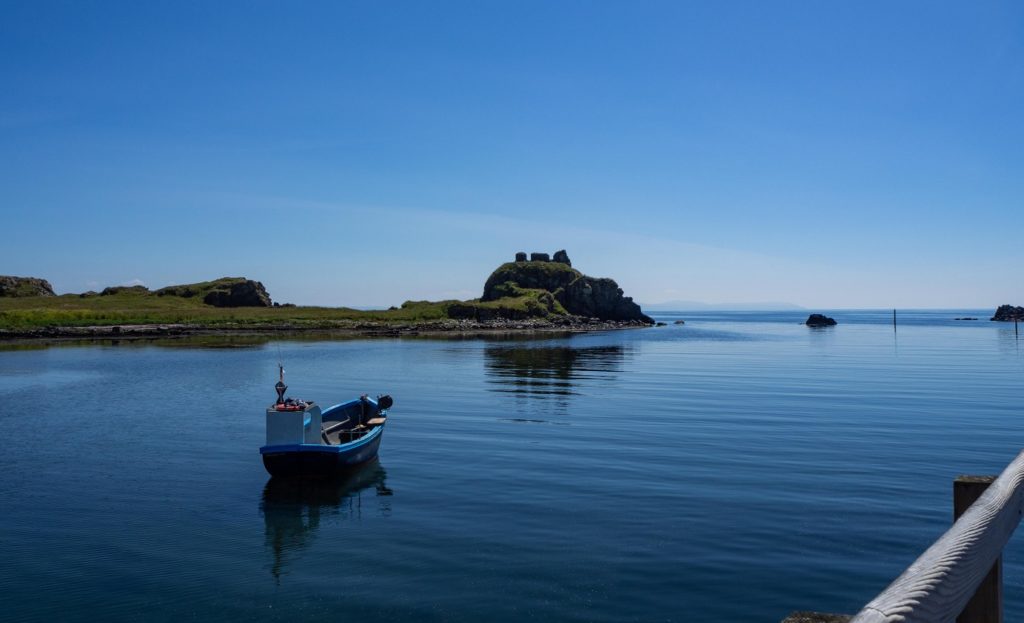 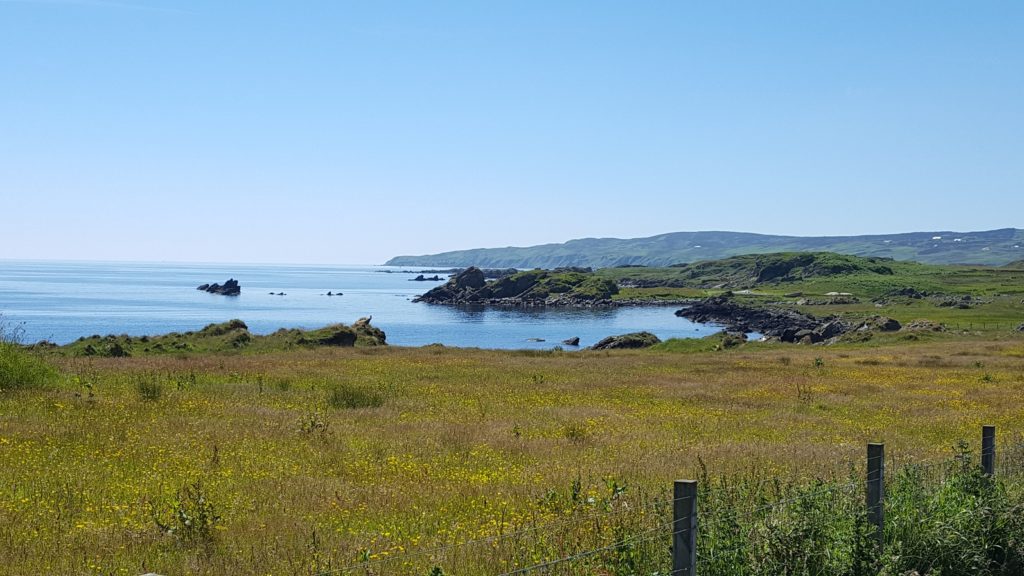 Our primary purpose for visiting Islay was to see the three distilleries along the coast: Laphroaig, Lagavulin, and Ardbeg. To make this happen, we rented bikes as our form of transportation! It’s a six mile round trip journey, which made biking the perfect option. Luckily, there is one company on Islay that rents bikes for the day. Let me clarify, this “company” is a guy who rents bikes from his backyard. As we walked up to the location, we were confused to find ourselves in a development of houses/apartments. A friendly stranger noticed us looking around and proceeded to tell us we were in the right place, just to go around back to this guy’s yard.

Low and behold, we said “Hello” and he matched us up with our bikes for the day! A strange but hilarious conversation ensued, in which my husband found himself being called “a tall chappie” while our friends were described as “more normal sized.” However, for 15 GBP each we happily paid the man and went on our way. It clearly is a very trusting island, because no deposit or personal information was required. He was even willing to let us pay when we returned, but couldn’t guarantee he’d be around so we might have to just leave the cash. What a place! 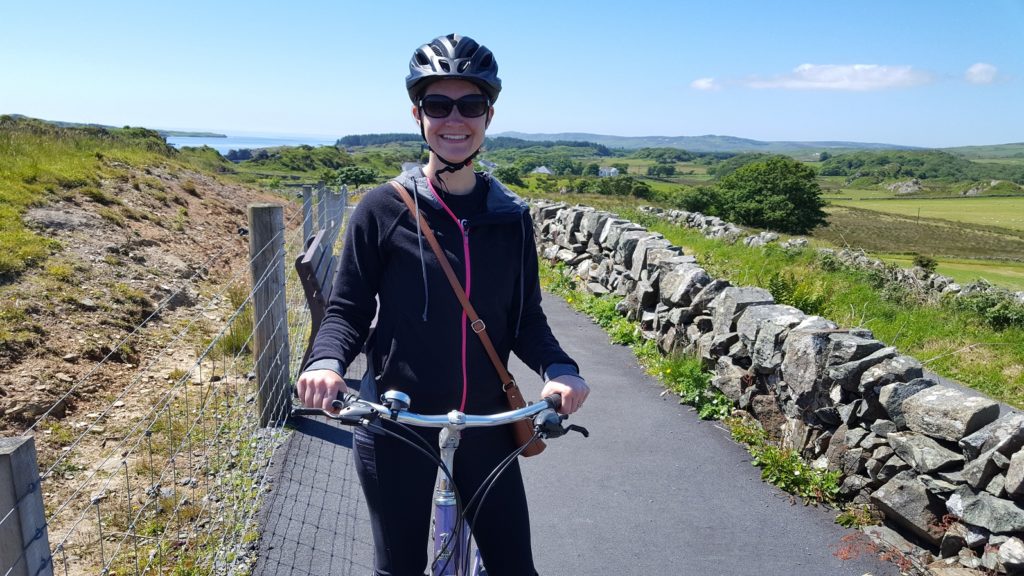 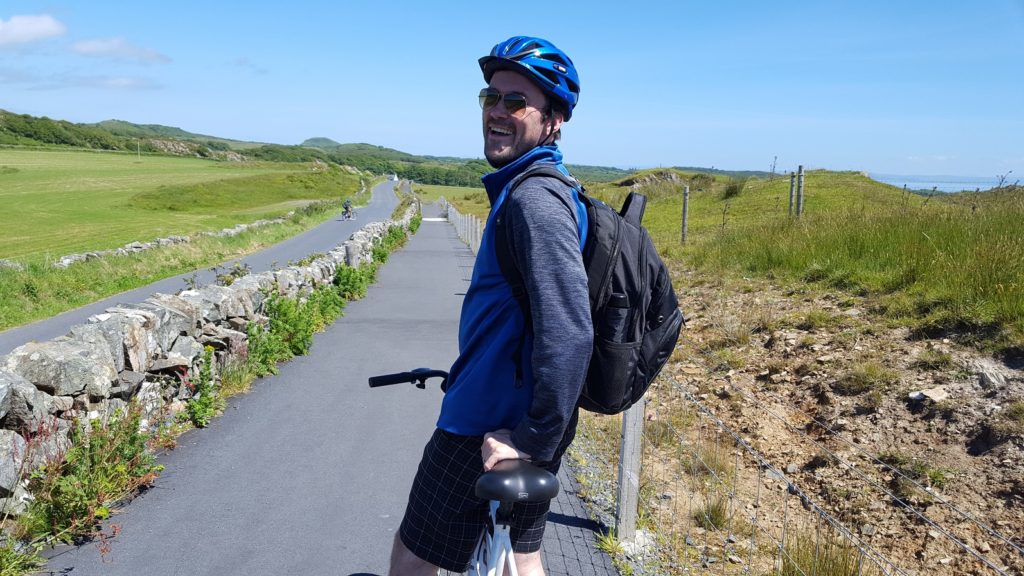 After a bit of a wobbly start (most of us hadn’t ridden bikes in over 10 years!) we set off on a wonderfully maintained bike path that leads straight to the distilleries. Thank goodness for the path because I would have been quite nervous biking along the narrow road. However, safely off to the side I could enjoy the spectacular views of the countryside and coastline. Four hours was just enough time for a quick visit to all three distilleries plus lunch at the Ardbeg café.

We tried to take a tour at Lagavulin, but it was completely booked up. So, if there’s any distillery in particular you want to see, I’d recommend booking ahead. In lieu of tours, you could sample flights of the scotch to save some time. Also, Ardbeg is the only one that serves food and gets quite crowded, so you may need to leave a bit of extra time if you’re planning to have lunch. 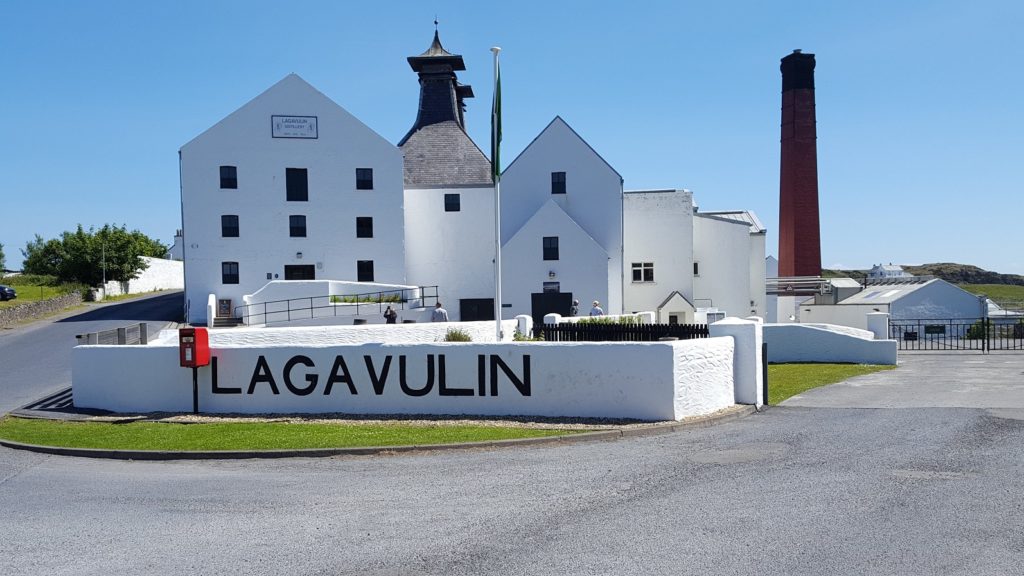 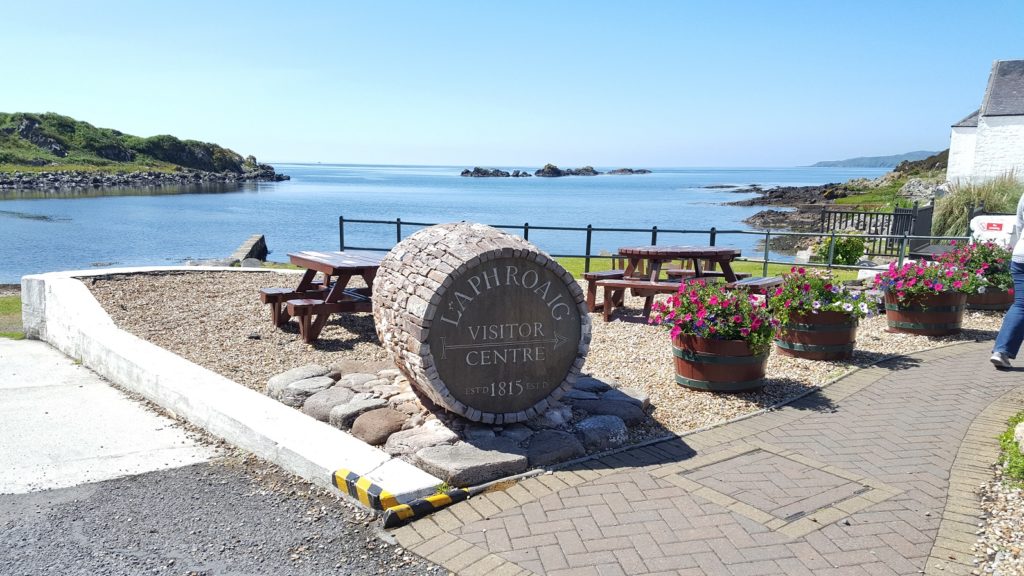 After lunch, we biked the whole distance back to Port Ellen, returned our bikes by dropping them off in the guy’s yard, and made it to the boat with about a minute to spare. Phew! To cap off our day, we spotted a few dolphins alongside our boat on the trip back. Scotland was truly showing off for us! 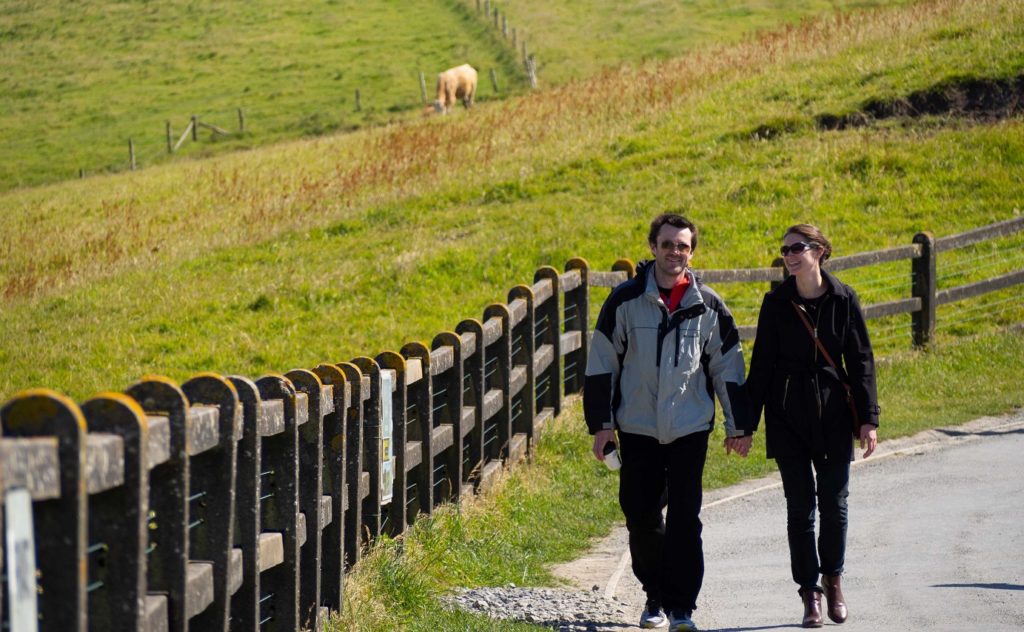 A rare non-selfie picture of us!! Photo cred: Patrick

For dinner that evening, we returned to a restaurant (Anzac Bar) that had turned us away the night prior due to no reservations. When the host again found out we had no reservations, he huffed and puffed a little but proceeded to seat us in the nearly empty restaurant. To our delight, we discovered that the early bird evening special (anytime before 7pm) was a free appetizer and dessert with any entrée. Yep, that’s right. 3 courses for the price of one entrée. Naturally, we all loosened our belts and placed our orders. The amount of food was astonishing and actually pretty high quality. I particularly enjoyed my warm brownie sundae for dessert : ) We rolled ourselves home and called it an early night.

The following morning we took our time packing up and then set off for The Dark Hedges. As Game of Thrones super fans, Jay and I were particularly excited to see some filming locations in Northern Ireland. The Dark Hedges is one of the more easily recognizable places since it’s the setting for a few scenes that take place on The King’s Road. Due to the popularity of the show, this area is now mobbed by tour buses, but we arrived early enough to avoid most of them. The road is closed to traffic, so you can wander and enjoy looking at the massive gnarled trees. It was pretty impressive. 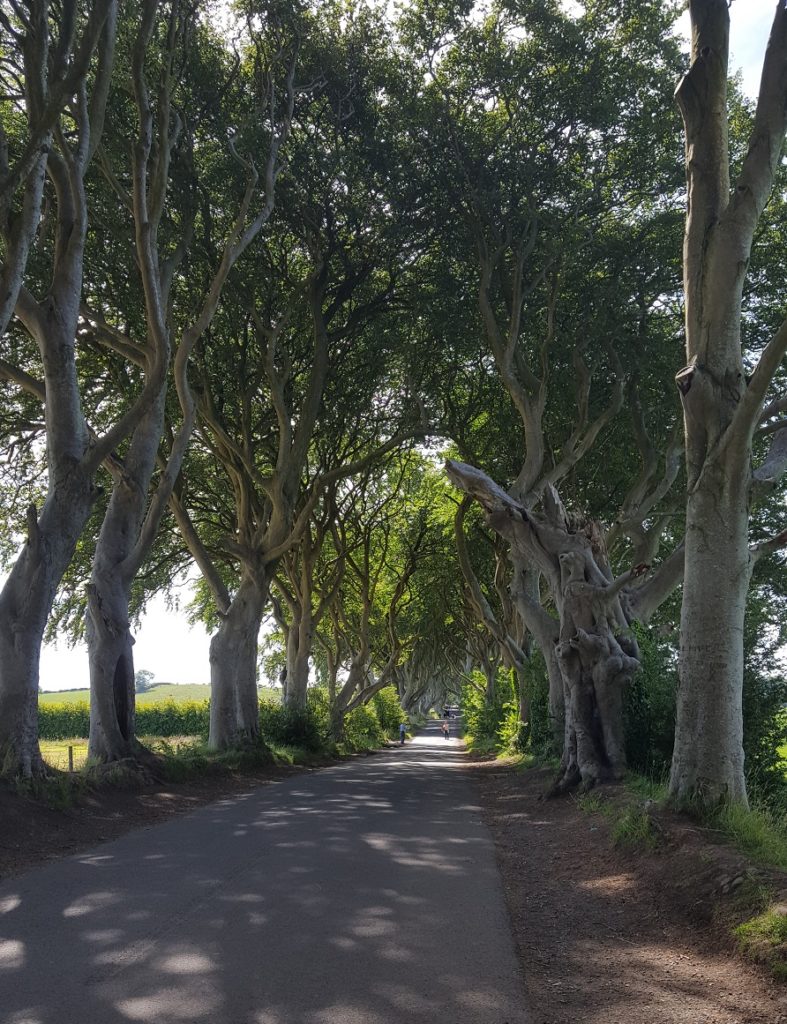 Back on the road we set off for Belfast. We had previously purchased tickets for the Titanic Experience at 4pm, so we had some time to kill. Honestly, Belfast isn’t all that exciting. There’s lots of shopping, but none of us were particularly interested in that so we basically just wandered around for a while. We had a late lunch at a cute pizza place and found out Maisie Williams, who plays Arya Stark, frequented the restaurant when they were filming in Belfast. Game of Thrones connections everywhere! 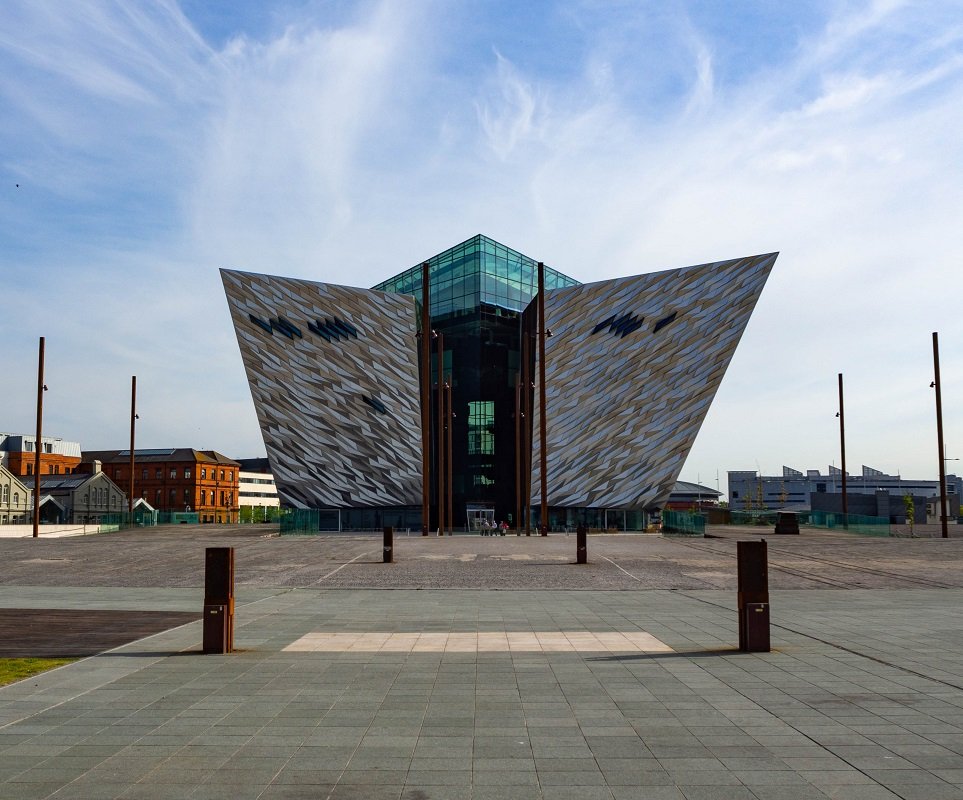 As 4pm rolled around, we drove over to the Titanic Experience. This is a phenomenal museum filled with intriguing exhibits. Since the ship was built in Belfast, it focuses more on that aspect of the story. We spent at least two hours here. Right outside, you can see an outline of the docks where the Titanic actually sat before it began its journey. Also, next door is the studio where Game of Thrones is filmed!!! As we were wandering outdoors, our friend was taking pictures and pointed out a fire burning on the outdoor set. They were just wrapping up filming Season 8, so it was awesome to see some of the set pieces burning. Jay has a theory about what will happen next season and which piece of that we saw. Hopefully those scenes will make the cut and we’ll recognize it in the show! 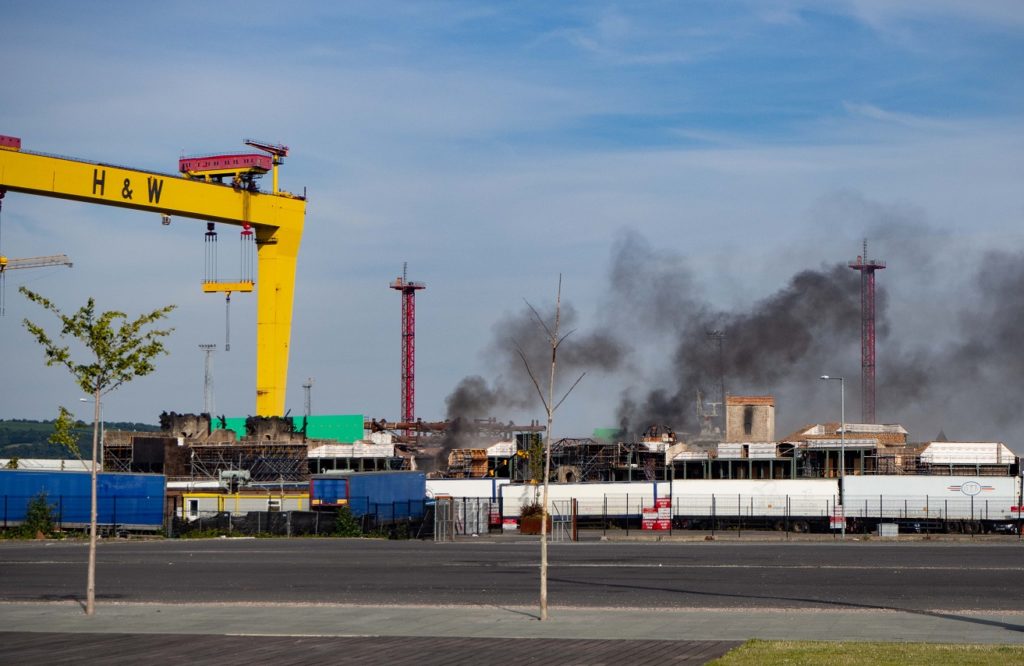 For dinner we walked down the street from out hotel (the Hilton Belfast) to Grannie Annie’s Kitchen, a slightly strange grandmotherly atmosphere serving comfort food. Apparently this is a chain, but the food is decently priced and tastes great! An early wakeup call the next morning led us to bed early.

A sad day for sure. We woke up bright and early around 6am to drive the hour and a half back to the Dublin airport. It’s a bit unnerving when you open the curtains at 6am and blinding sunlight greets you. Gotta love the ridiculously long hours of daylight! Thankfully our trip to the airport was uneventful and Jay and I easily made it for our direct flight back to Newark.

Overall, Ireland is one of my absolute favorite destinations. I could happily skip the cities and spend a full week enjoying everything the countryside has to offer. While I crossed most items off my to-see list, there are still numerous castles, experiences, and places I want to visit on a return trip. If you have the opportunity, don’t pass up a trip to Ireland! It’s a magical country that will completely win you over.

I'm an accountant living in Pennsylvania who's either reading, baking, or traveling the world in my spare time.

Who else out there loves retellings of classic nov

March Wrap Up!! Like most of you, it seems, I didn

⭐Book Review⭐ Bringing Down The Duke - a histo

Happy pub day to The Glass Hotel by @emilystjohnma

Thanks to Sophie Kinsella for creating the most co