After years of anticipation and over six months of planning, we finally visited Ireland!! The 11 days we spent in Ireland, Northern Ireland, and Scotland were simply magical. We packed plenty of activities into our days, but the country is so peaceful (and full of adorable sheep) that you can’t help but relax. I’ll recap all the details of our trip in a series of four Ireland Trip Review posts, with this first one focusing on Dublin!

I’m starting this Ireland trip review in Dublin. We flew Aer Lingus for the first time from Newark to Boston to Dublin. Prior to our trip, we were a bit anxious about the flight because we weren’t able to pick seats ahead of time (consequence of using United miles). Luckily, when we checked in at the airport a very helpful Aer Lingus employee found seats for us together! Points for Aer Lingus. The two flights were uneventful, which is always a good thing. Aer Lingus offered a hearty dinner including salad, bread, beef stew, and a strawberry mousse dessert. The entertainment selection was adequate, with plenty of new releases and classic movies to occupy the six hour flight.

Upon arrival, we successfully met our friends at the Dublin airport thanks to the prearranged plans and set off for Dublin! We took an express bus to our hotel so we could drop off our luggage first. Since Jay has IHG status, our room was ready and we could leave everyone’s luggage there. With nothing on our agenda for the first day, we wandered into the city. Right away, we found Trinity College and meandered through campus, admiring the old buildings and staking out where we’d visit the Book of Kells the next day. 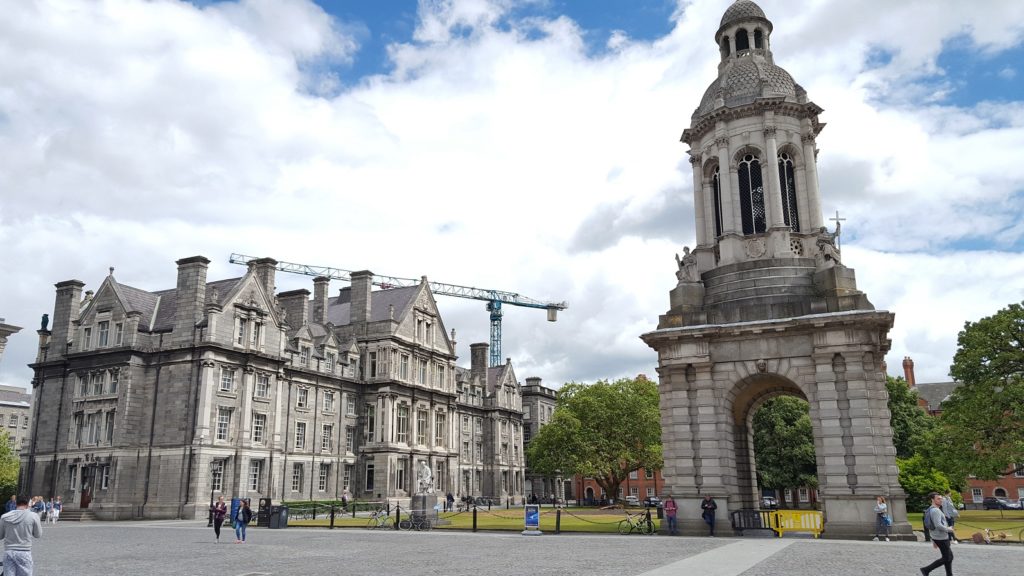 From there, we made our way to Dublin Castle, one of the sites I wanted to see. There is an option for a guided tour of the castle, but we passed due to rumbling stomachs and quickly found a spot for lunch. Dollard & Co, along the River Liffey, offered sandwiches and pizza slices. It’s also a bustling food market with lots of enticing options. A great choice for a quick, cheap lunch with views of the river. 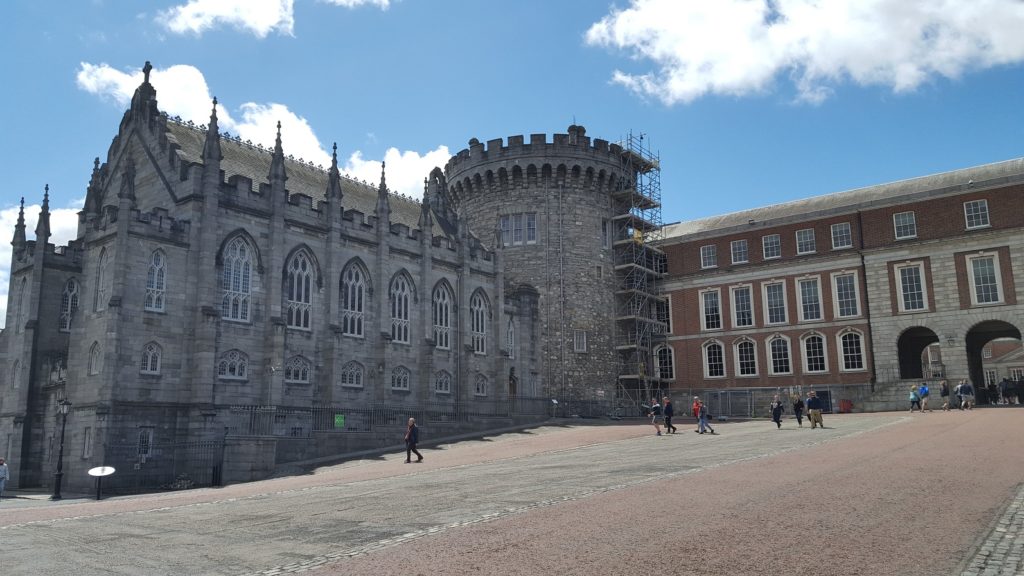 We returned to the hotel so our friends could now check in to their room and agreed to meet later to find dinner. With two hours of free time, I immediately asked Jay if we could visit a few bookstores!! What else would you expect? 🙂 First on the list was Chapters bookstore, near our hotel north of the river. It’s billed as Ireland’s largest independent bookstore and wow did it deliver!!! Walking through the door was like entering DisneyWorld for book lovers. Shelf after shelf and table after table were stacked with books. Plus, there are two entire floors to browse!!

They stock both new and used books at terrific prices. Due to limited suitcase space, we only walked out with three books, but we have grand plans to return. Part of the appeal are the UK covers, which are (purely in my opinion) prettier than the US versions and nearly impossible to find stateside. 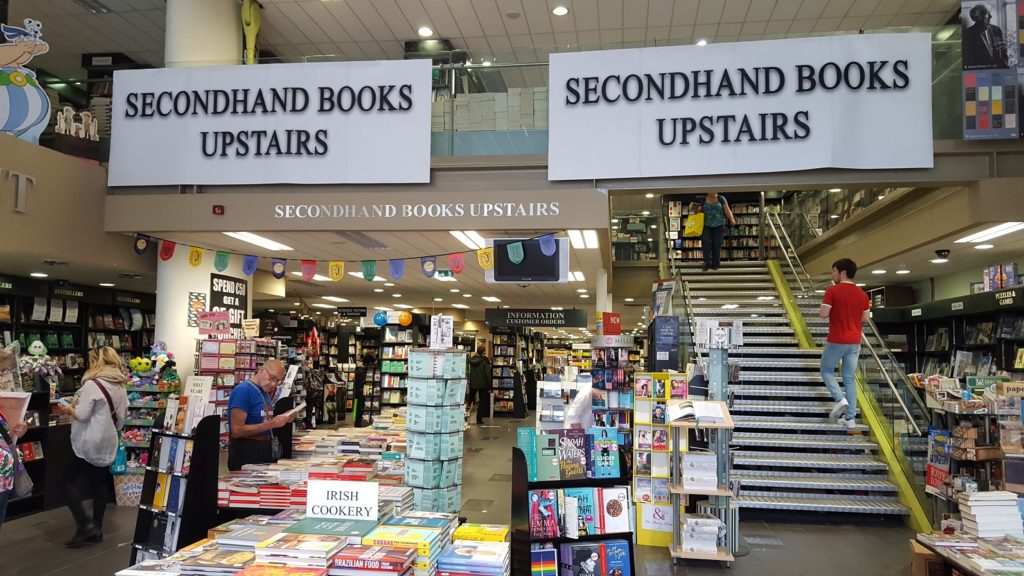 Running out of time, we made a quick trek to another, cuter bookstore, the Winding Stair Bookshop. However this was tiny and didn’t offer many used options. Hustling back to our hotel, we dropped off our precious cargo and met our friends for dinner. By this point it was only 5pm, but we were all massively jet lagged and didn’t want to walk more than 100 feet. So, we visited Murray’s pub right next door. The food was basic but tasted good. We also noticed the place was full of tweens clearly about to head to the Taylor Swift concert in Dublin that night. One of them got ahold of the jukebox, because during dinner we listened to six straight Taylor Swift songs. Not exactly classic Irish music, but who doesn’t love Taylor Swift?? 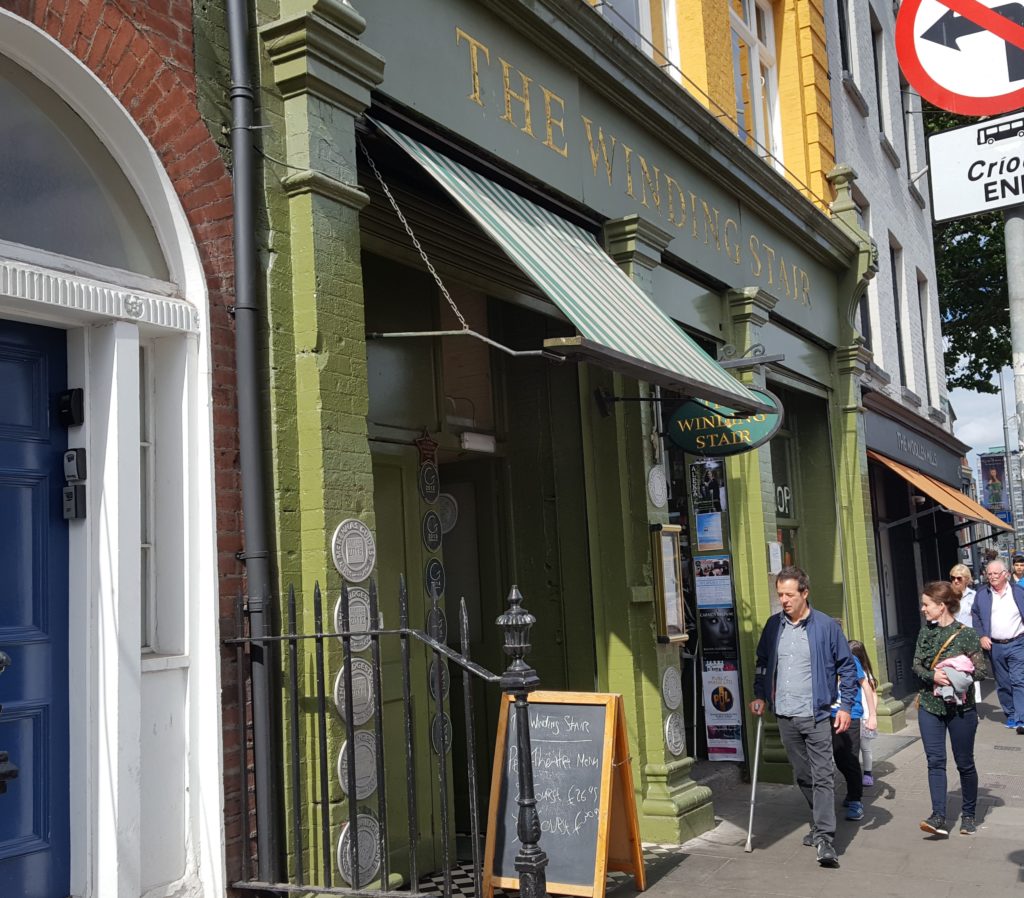 After dinner we toyed with idea of getting another drink somewhere, but went back to our rooms and were all literally asleep by 7pm.

13 hours of sleep later, we were ready for another day in Ireland! First up on the schedule was a visit to the Trinity College Library and the Book of Kells. By this point, Patrick and Tori were starting to realize the depth of my book fervor. It also happened to be Blooms Day in Dublin, an annual celebration of James Joyce, so they were convinced I picked these dates for purely literary reasons 🙂 Alas, a mere coincidence, I promise! However, I couldn’t pass up a chance to see the stunning Trinity library and illustrated bible housed there. 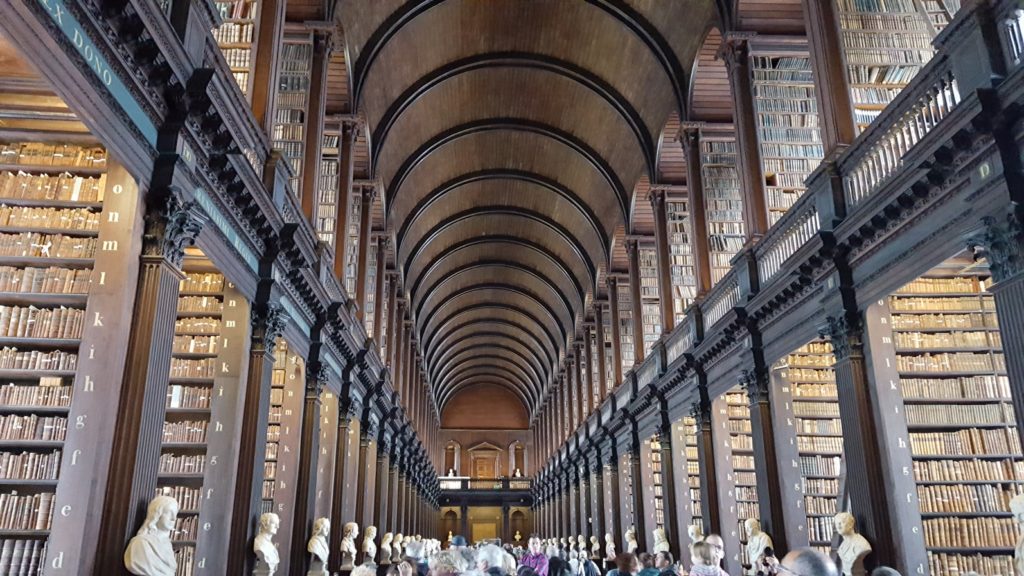 I highly recommend purchasing tickets for this exhibit ahead of time. Our scheduled entrance was the first of the day at 9:30am and there was already a lengthy line of people waiting to buy tickets. I can only imagine how much worse it would become as the day progresses. Once inside, there is a detailed mini museum discussing the creation of the Book of Kells and what you’d see within its pages. Guests are then funneled into the small room which contains the book and another artifact.

At this point, I’m embarrassed to say I walked right by it!!! There was a crowd of people looking down at two books which were fairly small, so I assumed it was some other illustrated tomes. I walked directly up the stairs to check out the library. Only after walking through the library and asking Jay “Where’s the Book of Kells” did he burst out laughing and tell me we already saw it! Oops. So I traipsed back downstairs and spent the appropriate amount of time actually admiring this gorgeous Bible. Typical Rachel move right there. It is an incredible piece of history and the library itself is absolutely stunning. A happy one to two hours can be spent here. 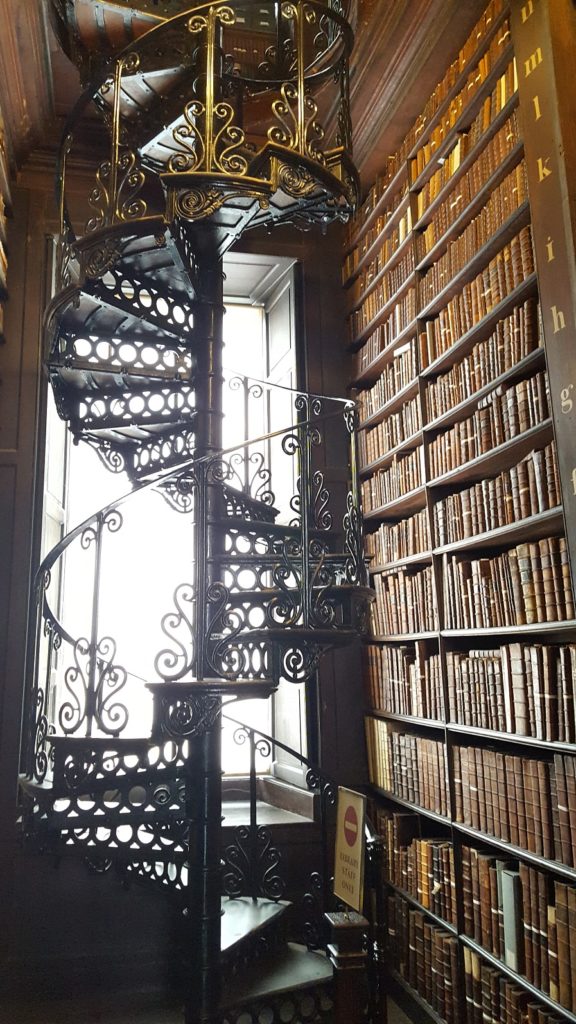 Our next stop was the Guinness tour, but that wasn’t scheduled until 4pm so we walked through the city and stumbled on St Stephen’s Green. The park includes helpful signs that describe the Easter Uprising and points out locations of various events that day. We ultimately decided to fit in all our drinking tours in one day and walked all the way to the Jameson Distillery to kill some more time. Let me preface this by saying I HATE whiskey, scotch, bourbon, etc. Even so, it’s still worth taking the tour. It’s a rather hands on, fascinating explanation of the history of the company and the process to make whiskey.

There’s also a tasting portion that compares Irish vs Scottish vs American whiskey which was intriguing. I managed just the smallest sips and gave the rest to Jay. Included in the tour price is a drink ticket which gets you whiskey neat, whiskey on the rocks, or a Jameson and ginger cocktail. Even as a whiskey hater, I was pleasantly surprised by the cocktail…and drank the whole thing! So, don’t be dismayed if you’re not a huge fan of this stuff. The cocktail at the end is worth your while.

For lunch, we did a quick stop at a make your own salad/sandwich/wrap place across the street from the distillery. Then, made our way to Guinness. The difference between these two tours is significant. Jameson’s tours are small groups led by a perky, informative guide. Guinness is an enormous multi-story experience that you walk through at your own pace. There aren’t exactly a whole lot of steps in making beer, so they add fancy exhibits and a history of the company to hold your interest.

Also with your ticket, you get a free pint of Guinness. We chose to go through the Guinness Academy and actually learned to pour our own beer! It’s a specific, two-step process so it was a blast doing it ourselves. We took our beers to the top floor afterward to enjoy the 360 degree views of the city. Quite a fun way to spend an afternoon. Once again, I’d recommend purchasing tickets ahead of time to make sure they aren’t sold out! We also went later in the day which brought down the price a bit. 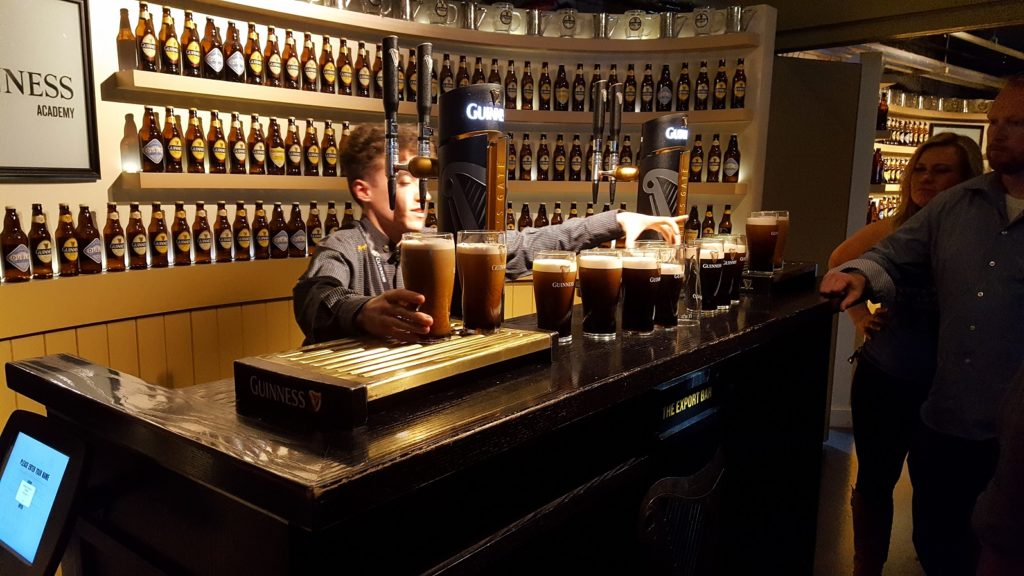 For dinner, we ventured back to the Temple Bar area to a bright blue pub called The Norwegian, which caught our eye earlier that day. Upstairs hosts the quiet restaurant and we enjoyed a delicious dinner there before heading back to the hotel for the night. It felt like a significant accomplishment to stay awake until 9pm 🙂 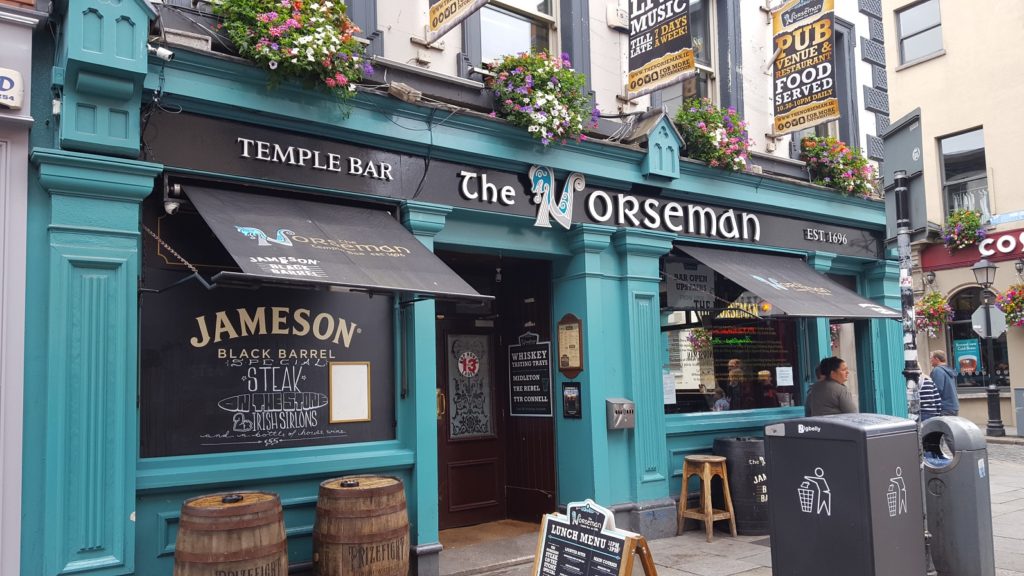 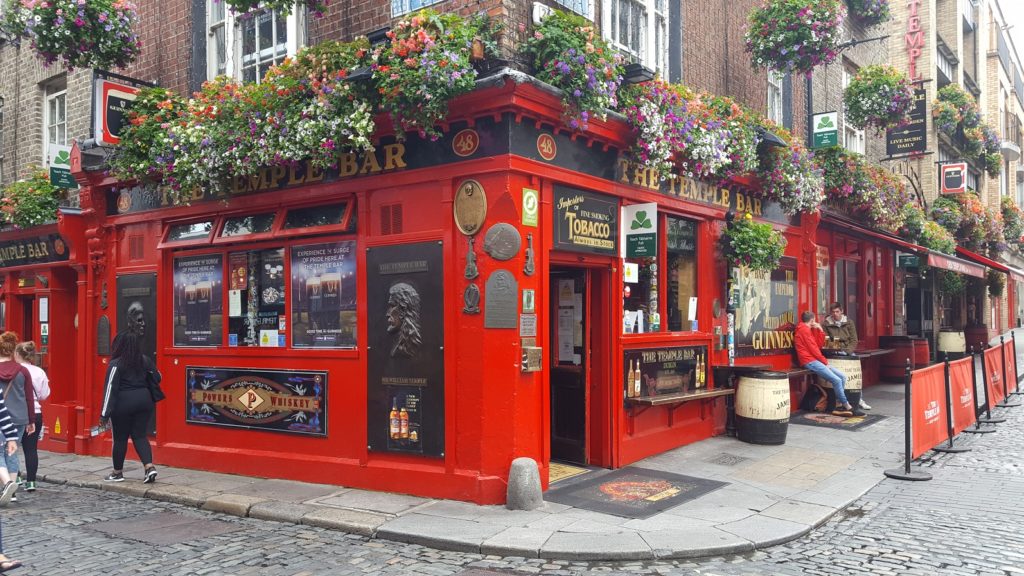 Overall, Dublin was worth seeing once but I wouldn’t feel the need to stay there again on any future trips. The Book of Kells, Guinness Factory, and Jameson Distillery are all unique to the city and definitely worth a visit, but you don’t need to allocate more than a day or two here. The real treasure of this country is found in the countryside. Head over Ireland Part 2 for the next post in my Ireland trip review. 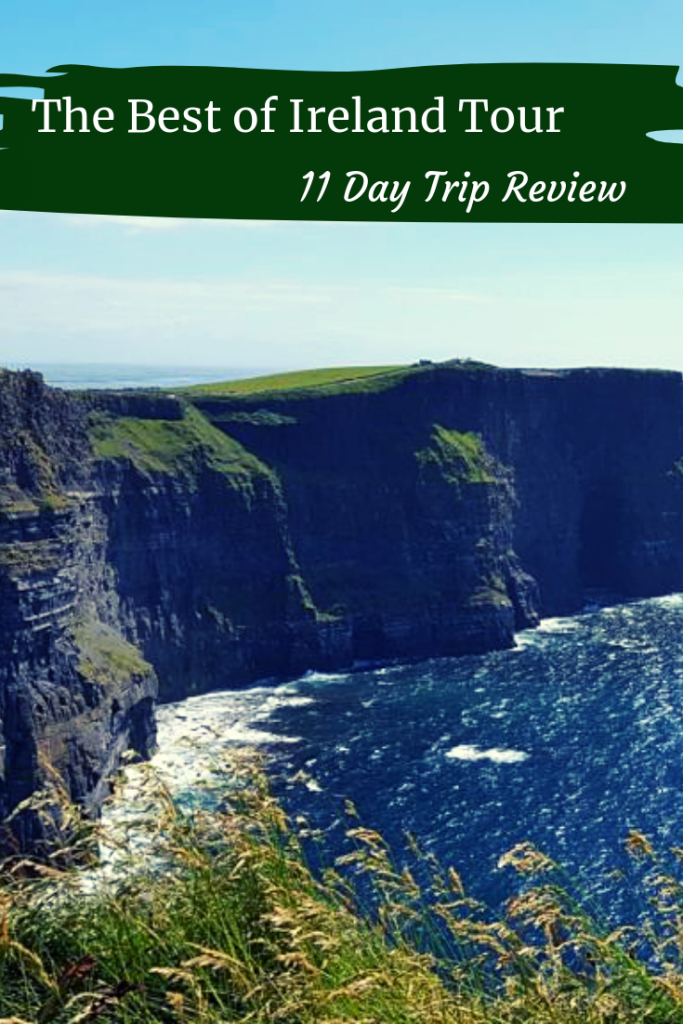