The Flatshare Review – Find out if you’ll love this book as much as I did!

The Flatshare is your quintessential romantic comedy in book form and I loved every minute of it! Tiffy and Leon are strangers who agree to share an apartment since their respective job hours mean they won’t be there at the same time. It’s a win-win situation where they’ll never even have to meet. Once Tiffy moves in, they start leaving each other notes to communicate about the necessities: garbage day, leftovers, etc. Soon though, the notes become longer and more personal. Is it possible to become friends with or maybe even start falling for someone you’ve never met?

I’m so thankful I received a copy of The Flatshare as part of the blog tour because it’s easily one of my favorite reads this year. I even recommend it in my summer reading guide! Tiffy and Leon are both unique and funny characters that I wanted to meet in person! I particularly liked Leon’s point of view because it’s written in a rational, straight to the point style. That slight alteration in the writing made me feel like I knew him even better.

I’m also generally a fan of telling stories through emails, texts, or any similar form of communication. Thus, the Post-it notes were a delight to read and one of my favorite aspects of the book. Although it’s a bit of stretch to believe strangers would share the same bed (ew, gross), the rest of the story was plausible. The way Tiffy and Leon get to know each other is slow and steady. So I was all in by the time they realized there might be more feelings there.

Chick lit lovers will enjoy this novel, but it’s also a solid choice for anyone looking for a light, fiction read. It avoids cheesy cliches or completely unbelievable situations. Instead you get witty dialogue and a couple you happily hope will get together despite the obstacles!

Beth O’Leary worked in children’s publishing before becoming a full time author. THE FLATSHARE is her debut novel. The idea for The Flatshare came to Beth when her doctor boyfriend was doing long night shifts as part of his training. They could go weeks without seeing each other, but she could track his life by how many cups of coffee were left on the counter, by how much he’d eaten and whether the bookmark in his novel had changed locations. It made her wonder – what could you learn about someone if you lived together but never overlapped?

Would you feel comfortable with the living arrangement in The Flatshare?

Heck no! Well, maybe if there were two separate bedrooms, but sharing a bed is far too strange for me. I liked living alone after college, so I would be all for rooming with a strange who has an opposite schedule, but I’d need my own dedicated space.

What did you think of the author’s use of Leon’s unique style of thinking/speaking?

In other book reviews, readers commented that they were annoyed with the clipped style of Leon’s sections. I actually loved it. I thought it helped build his character and placed me directly in his head.

Do you prefer books that use epistolary writing (letters, texts, post-its) or is that better left out?

I’m always excited to see letters, emails, or any other form of written communication in novels! I think it’s used so often these days that it brings a novel to life in my eyes. Witty banter is often done particularly well (since I know from personal experience it helps to have time to think of the best responses!) In the same vein, if I’m reading a historical novel, it’s fascinating to read the lengthy letters used back then as the primary form of communication.

The Flatshare Review – Based on my thoughts, will you be reading this novel? 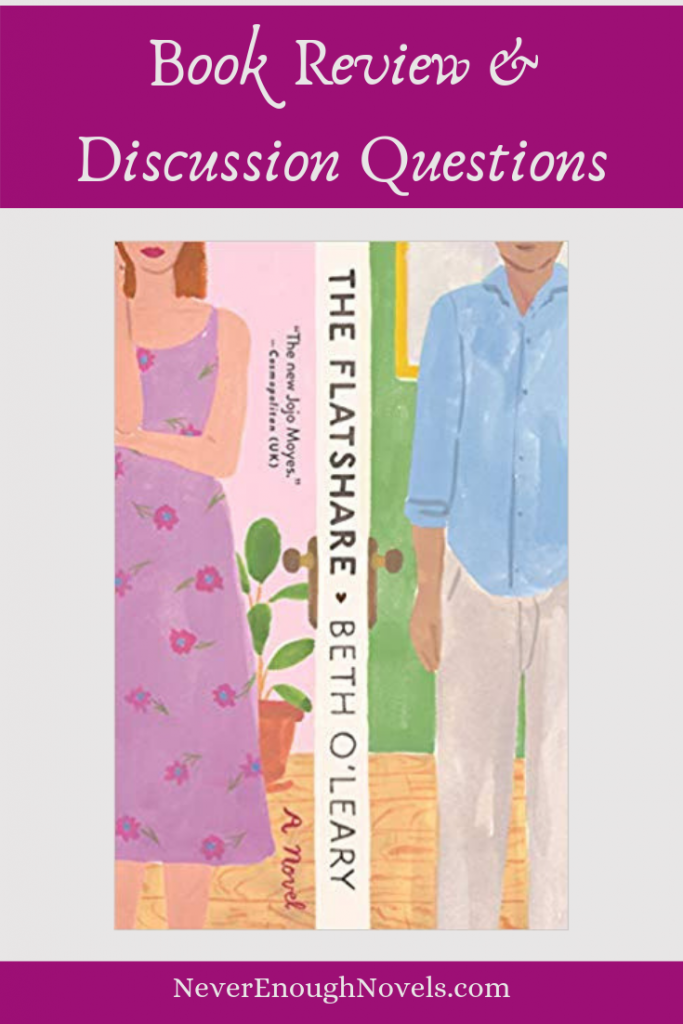