Although the absolute best part of my recent trip to London and Paris is that I got ENGAGED (!!!!), we still had a terrific time overall exploring these two cities. London was brand new for both of us, which made it all the more exciting. I had been to Paris before for a work trip, but it was certainly a much better experience enjoying the city with Jay :). Since we were gone for 8 days, I’ll split this London and Paris trip report into four sections. Part 1 covers our flight to London and the first two gorgeous days we spent there. 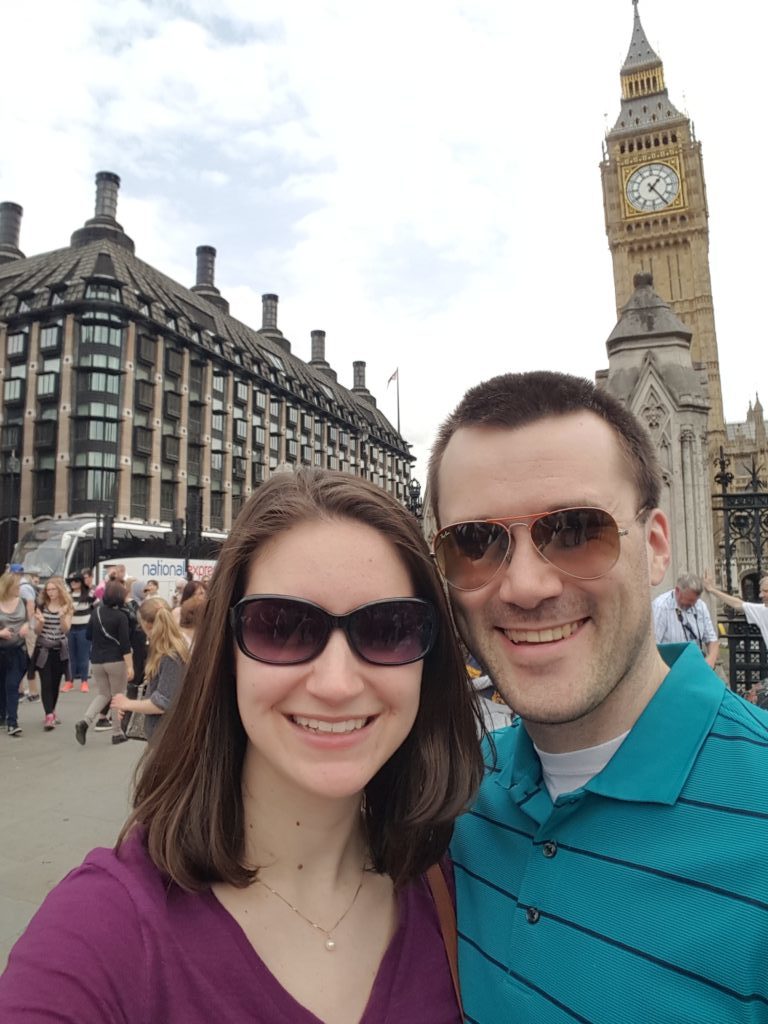 Our flight from Newark to London on United took off around 10pm and arrived around 10am the following day, London time. We checked in 24 hours before the flight and snagged free upgrades to Economy Plus seats as a result of Jay’s status. This gave us a few extra inches of legroom… a huge bonus on a 7 hour flight. The seats were fairly comfortable and we were served complimentary wine and beer, dinner, and a snack before landing. For dinner, we both chose the chicken option which featured a strange cold couscous salad, baked chicken with rice and a sauce and a dinner roll. Unfortunately, it was probably one of the worst airplane meals I’ve had and the wine was equally terrible. Clearly there’s a reason it’s complimentary… 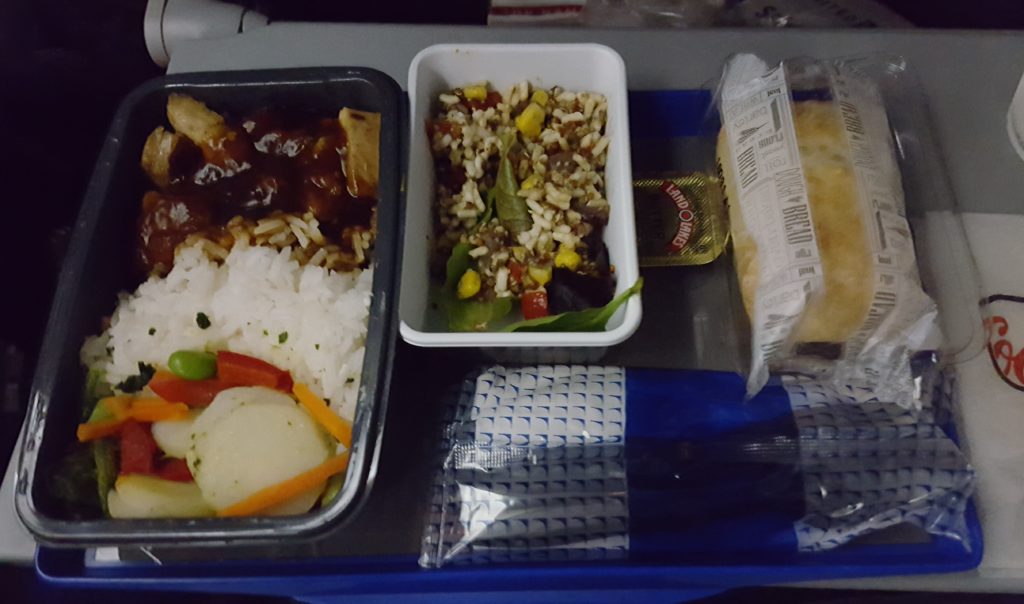 Luckily, United redeemed itself with a great selection of on-demand TV shows and movies that you could watch for free on the screen in the seat-back in front of you. There were also outlets available at each seat to charge your electronics. I watched a few movies and managed to sleep for about 3 hours, so it was an overall decent flight.

We purchased Visitor Oyster cards prior to our trip, so we were able to head straight to the London Underground (Tube) for transportation to our hotel. I also checked in at the hotel the previous day and made them aware we would be arriving around noon. They had our room ready to go! Props to them for the early access.

Our favorite thing to do when we arrive in a new city is walk around the hotel neighborhood to get a feel for the surrounding area. As it turns out, we were just a few steps from Buckingham Palace! We stumbled upon it just as the Changing of the Guards began, so we stopped to watch a few minutes of that ceremony. Then it was off to grab lunch at a nearby sandwich shop. 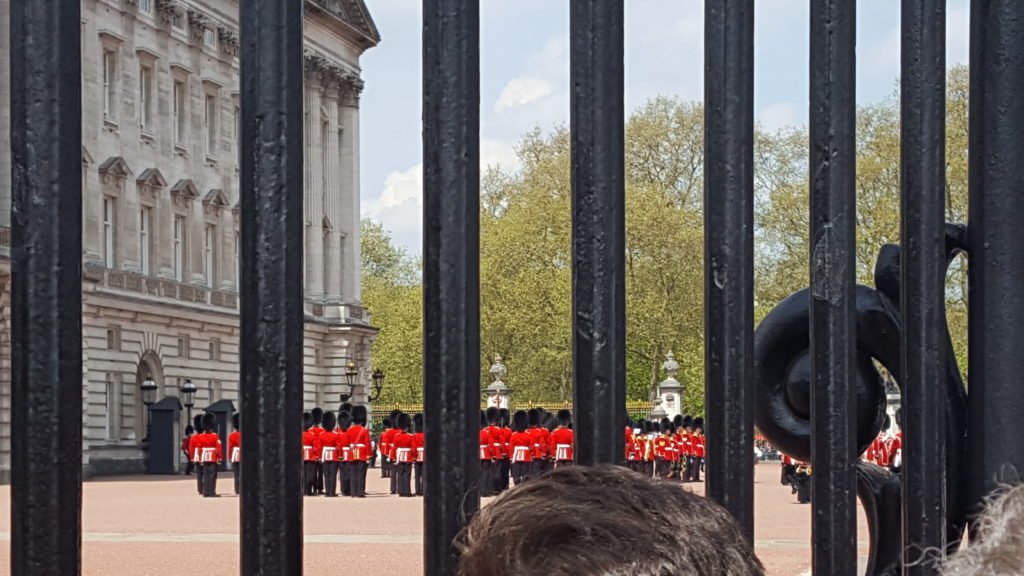 After lunch we continued wandering and found our way to Westminster Abbey and Big Ben! Basically, we knocked out three of the biggest attractions within a few hours of our arrival. We couldn’t believe they were all that close to our hotel. 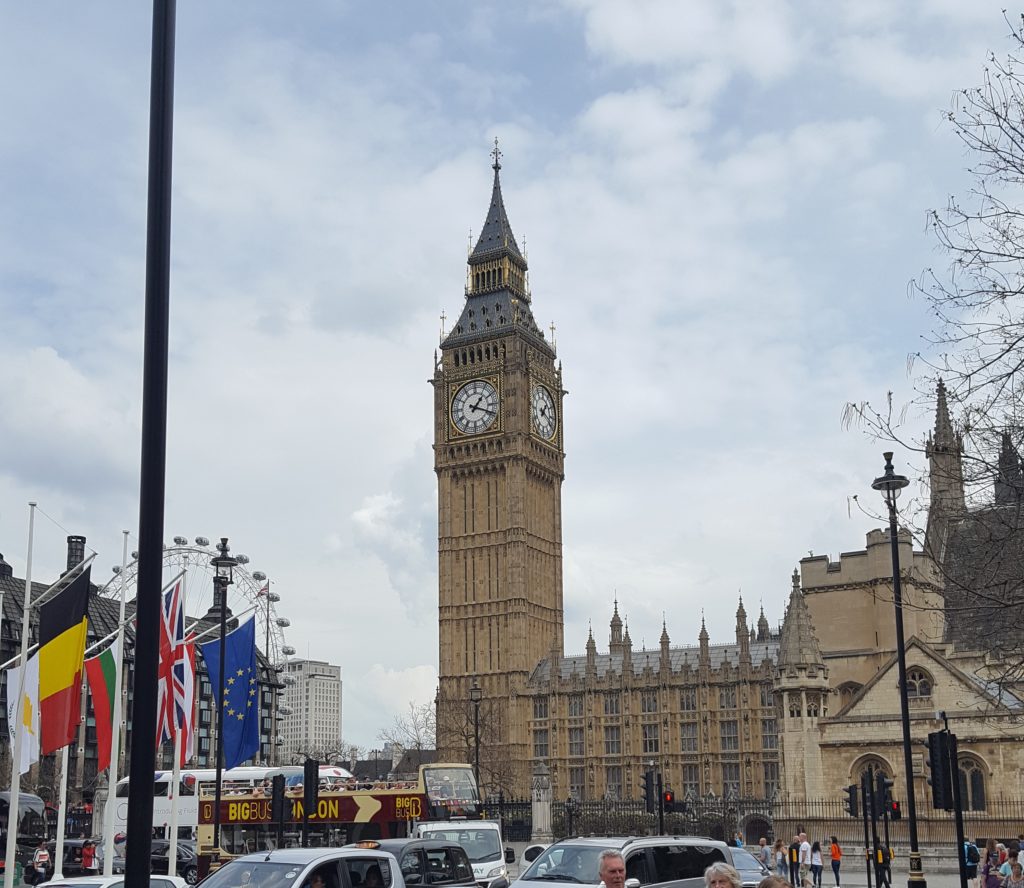 Unfortunately, I had a few blister issues (oops – I didn’t break in my shoes properly), so I complained a lot and forced Jay to go back to the room to relax for a bit before dinner.

Hoping to start off our trip with a classic English pub experience, we selected Cask Pub & Kitchen from Yelp and took the tube to the Pimlico station. We arrived in a residential area and found the pub tucked into a row of apartments. It was bright and sunny and not crowded. Perfect. Following the pub rules that we Googled prior to arrival, we purchased drinks at the bar before sitting down at a table. After perusing the menu and figuring out our table number, we returned to the bar to place our food order – burgers!

Apparently the British cook their meat quite thoroughly haha. The burgers were very well done (and this trend continued the rest of our trip). I didn’t mind, but Jay wasn’t as thrilled. However, the chips (fries) were fantastic! Thick and crispy. Yummm. 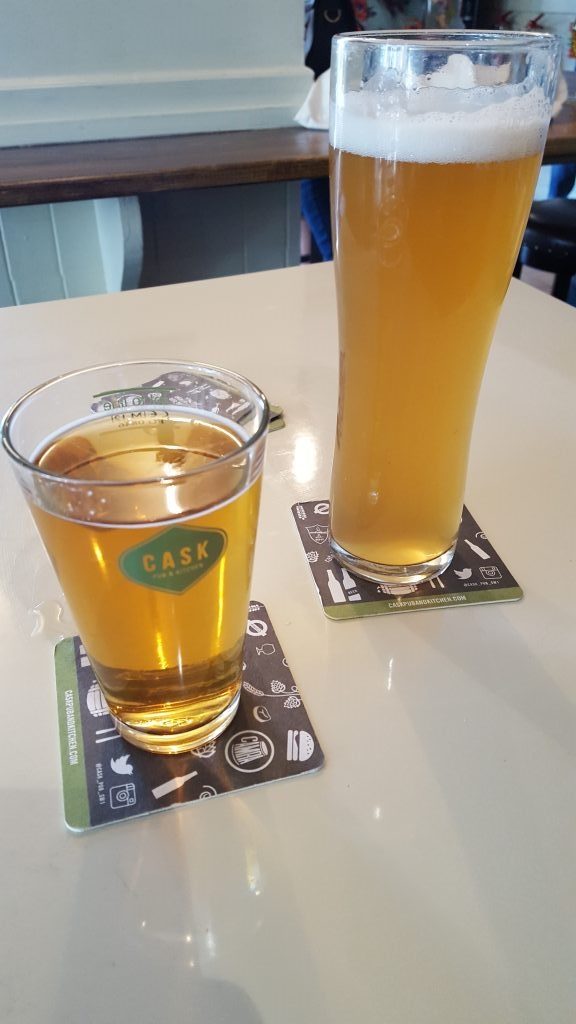 We hung out for a while longer and people watched until I couldn’t keep my eyes open. All of 7pm ha. Then it was back to the hotel where we slept for 12 hours.

Another partly cloudy (but not rainy!) day loomed ahead of us on Day 2, so I chose a few outdoor markets as the first item on our agenda. We visited both the Brick Lane street market and the indoor Old Spitafields Market. They had quite a wide variety of goods to peruse, but nothing caught our eye to bring home. 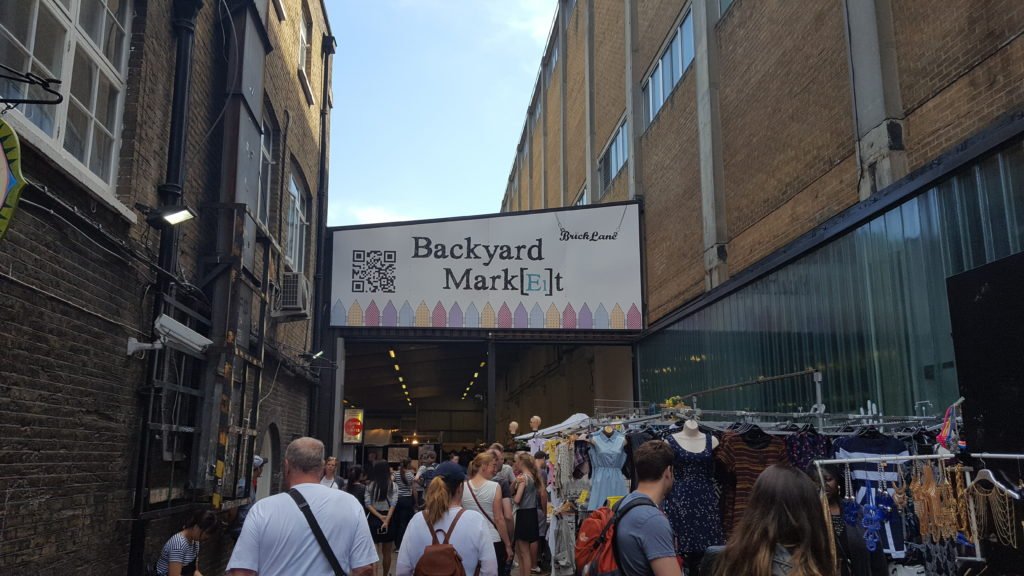 Our next stop was the Baker Street station, so I could get my literary fix and see the fictional residence of the legendary Sherlock Holmes! Before seeking out 221B, though we visited a nearby pub for the traditional Sunday Roast lunch. 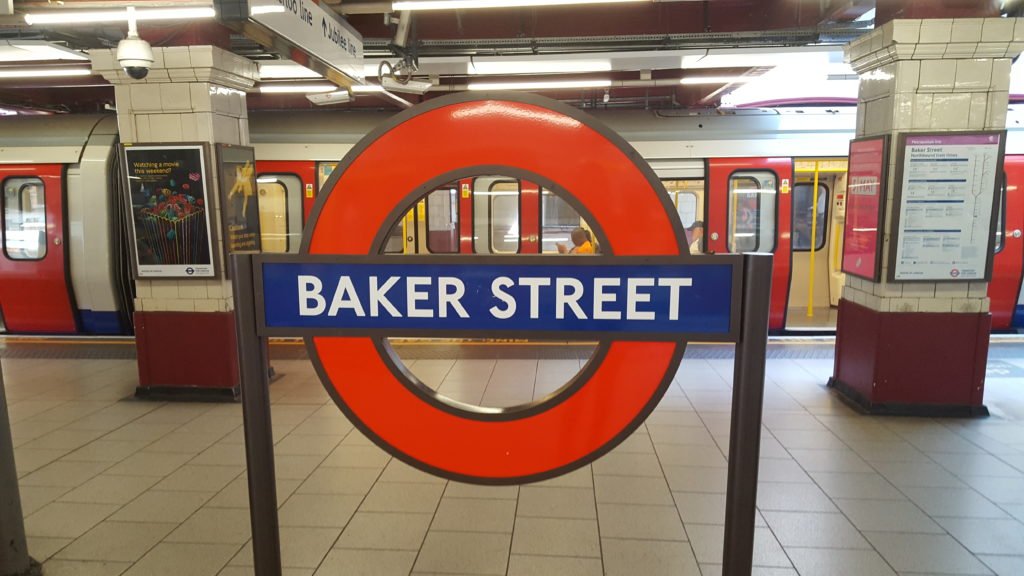 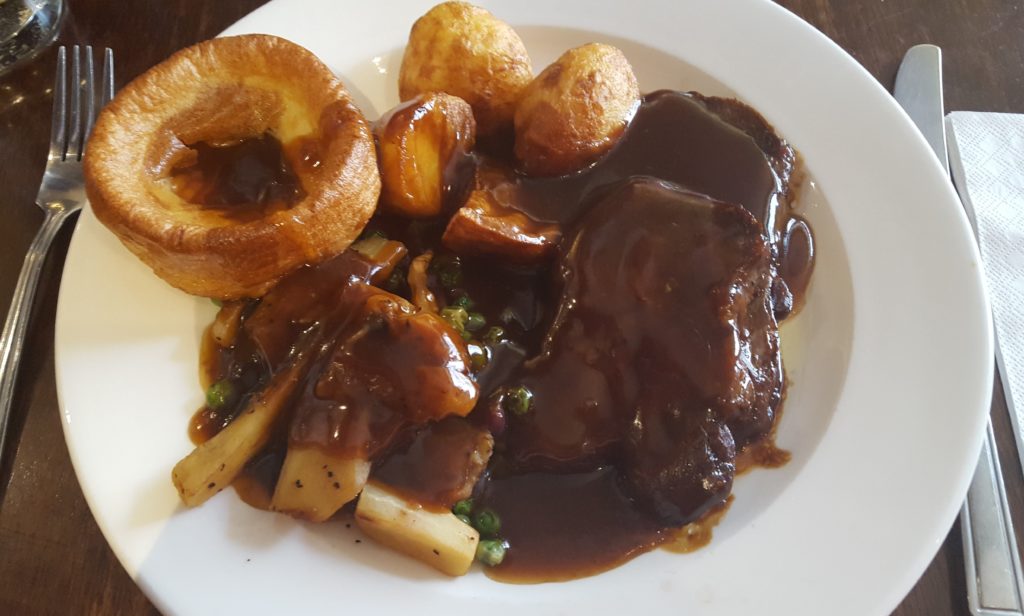 It turns out that 221B Baker Street is a Sherlock Holmes museum. Sadly, the door is guarded by a policeman and only museum ticket holders are allowed to enter. Also, disappointingly, the actual door doesn’t have the 221B marker (as you see in so many pictures). The notation is etched on the glass above the door. Sigh.

From there we walked to Regent’s Park and Primrose Hill. It had turned into a beautiful sunny day, so the park was full of Londoners enjoying the weather and the view from Primrose Hill was crystal clear.

After a brief rest back at our hotel, we set off to eat dinner at a pub directly across from Big Ben. It’s hard to beat a view of one of the city’s iconic landmarks while enjoying a pint : ) 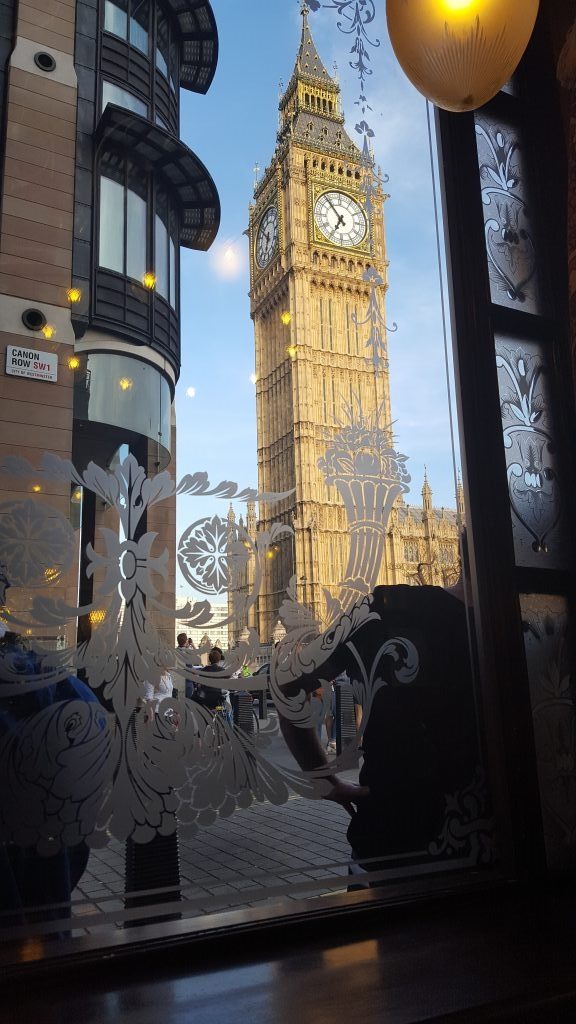 With that, we wrapped up our first two days in London. Check out Part 2 of my London and Paris trip report! 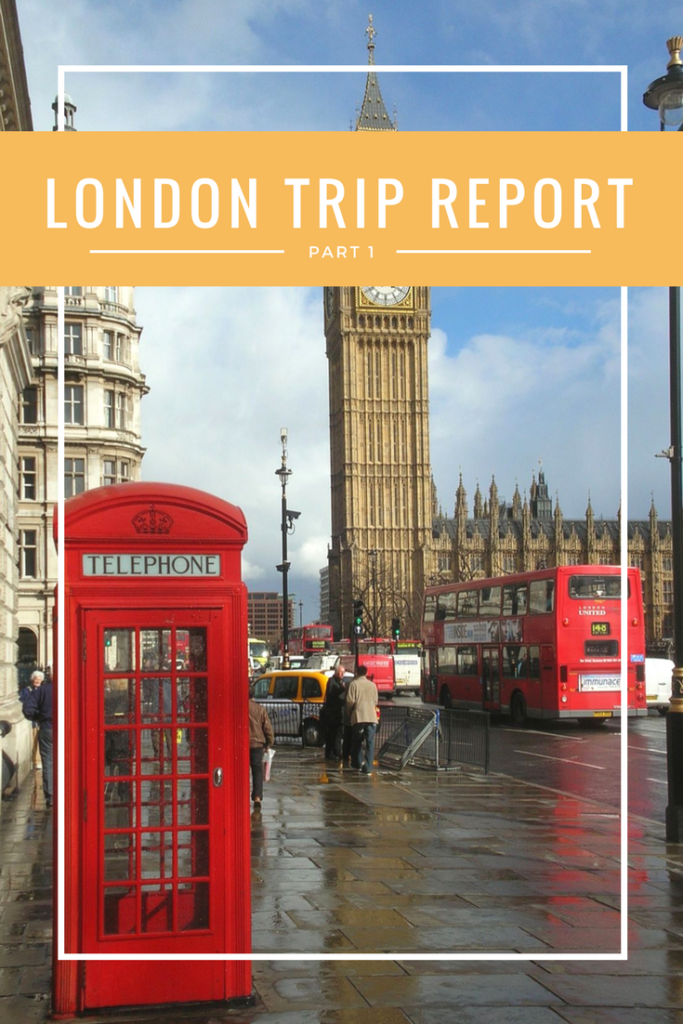