On our fifth day of vacation, we ventured from London to Paris! These last two parts will cover our train ride, our time in Paris, and our flight home. To be honest, this post is my favorite because it includes the day I got engaged!!! I’ve probably included those three words in every single one of my last few posts, but I just can’t help it : ) Before I jump in, make sure you’re caught up on Part 1 and Part 2 in London!

We slept in and enjoyed one last free breakfast at our London hotel before taking the tube to King’s Cross / St Pancras station. Wow, I had no idea this place was that humongous. I’m glad we left early because it took a few tries to find the right area for the International Eurostar trains. 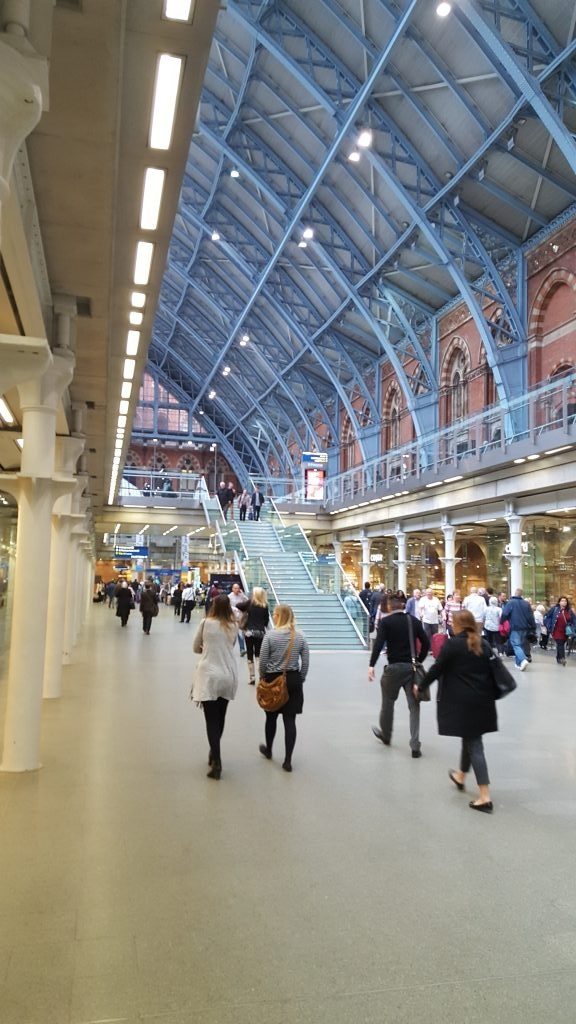 Once there, Jay used his credit card to print our tickets at one of the kiosks – no need to have your ticket printed out ahead of time. Unfortunately, we didn’t have a whole lot of time to spare so I wasn’t able to find Platform 9 3/4 and take the obligatory Harry Potter fan photo. That is a must-do for next trip though : ) 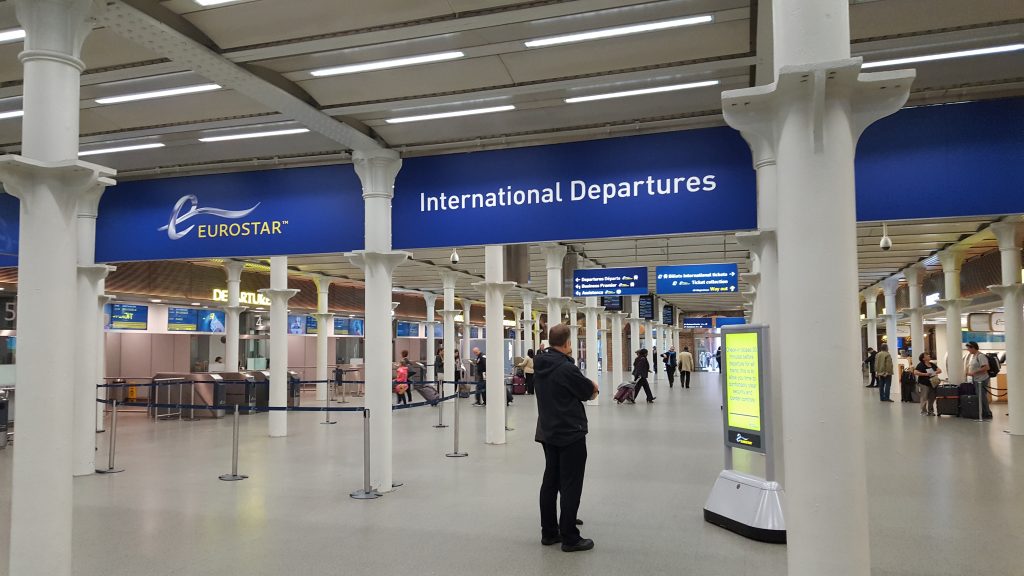 About 45 minutes before our scheduled departure time, we scanned our tickets, went through security, and entered the departures waiting area. When our train arrived, we were herded onto the platform and quickly found our seats. The train was actually nicer than expected: comfortable seats, tray tables, free Wi-Fi, and a selection of TV shows and movies. I found the view fascinating as well since we only spent about 25 minutes underwater and the rest of the time was through English and French countryside. 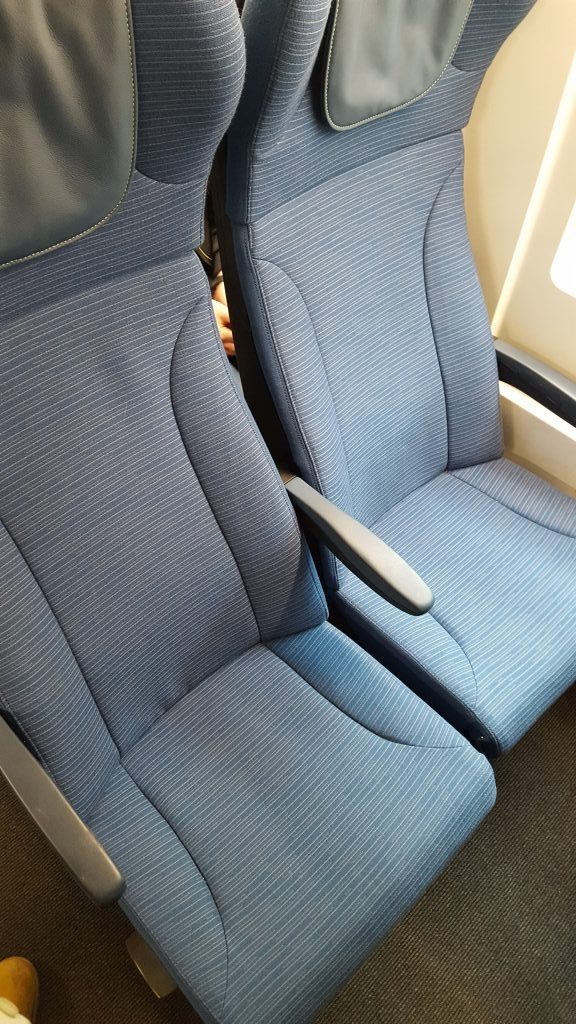 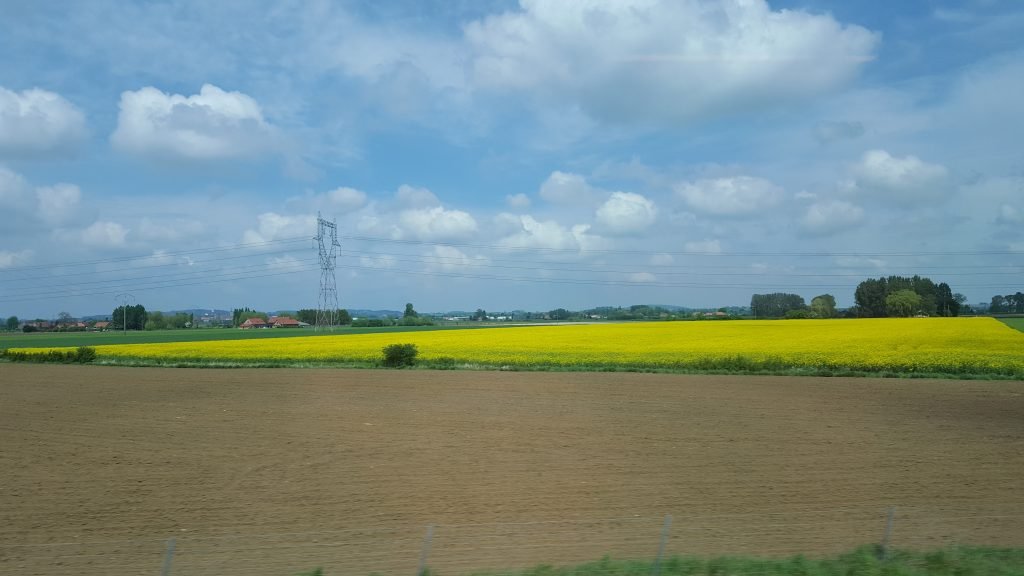 Upon our arrival in France, we purchased the Pass Navigo Metro card for unlimited access to the Paris Metro. After a slight mishap involving luggage stuck in the turnstile and me panicking about being stuck forever outside the Metro entrance, we eventually made our way to our hotel stop.

We inadvertently picked a wonderful location! Our hotel opened in April 2016 and we were staying there just a month later. Admittedly, I was a little nervous about experiencing mishaps as a result of a recent opening, but those fears were unjustified. The hotel room was gorgeous and the staff was exceptionally friendly. It was also located in a local neighborhood and there were tons and tons of cafes and restaurants within walking distance. 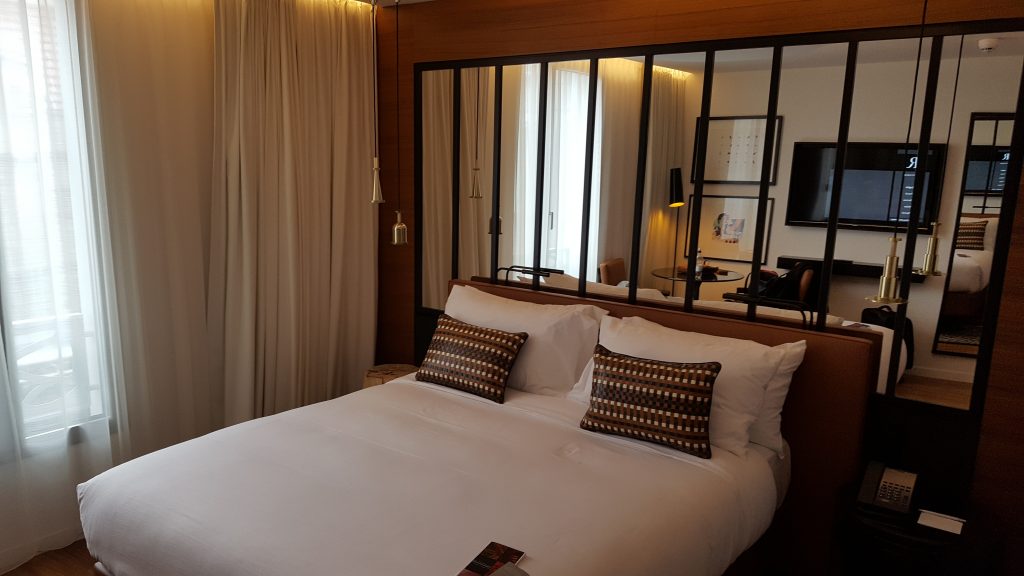 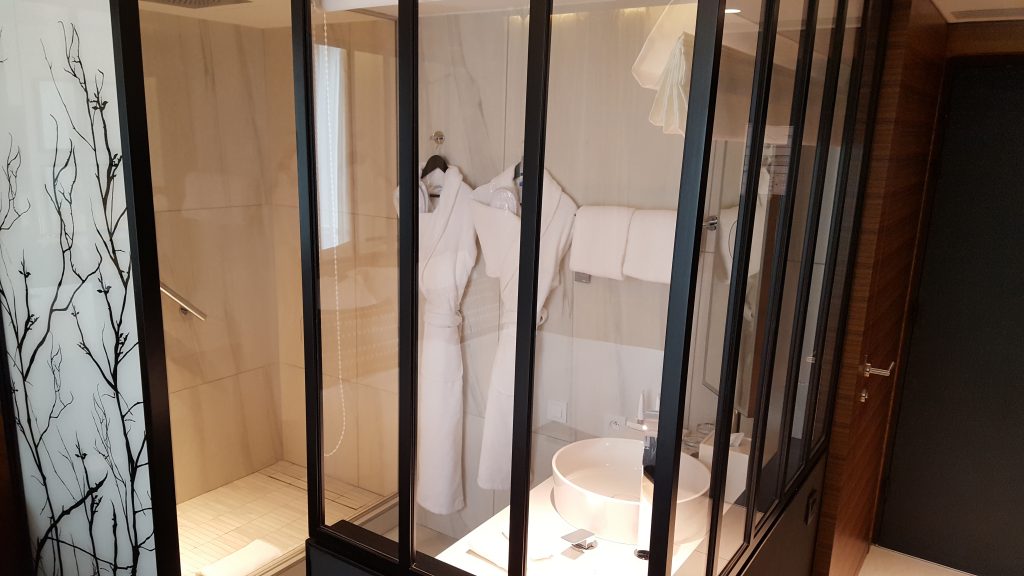 After dropping off our stuff, we ventured out for dinner. Little did I know that when Jay mentioned he “forgot his phone” and went back to the room to grab it, he was really grabbing an engagement ring! I was so clueless. With probably hundreds of dinner options within a few blocks, we eventually stopped looking and settled on a cafe. Our first meal included a flatbread and an open face sandwich that we shared. 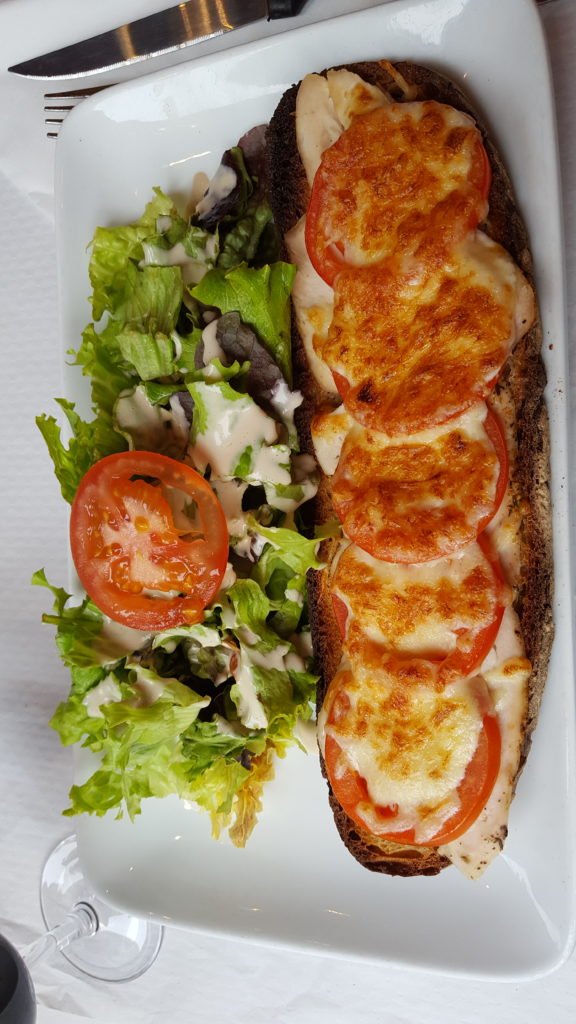 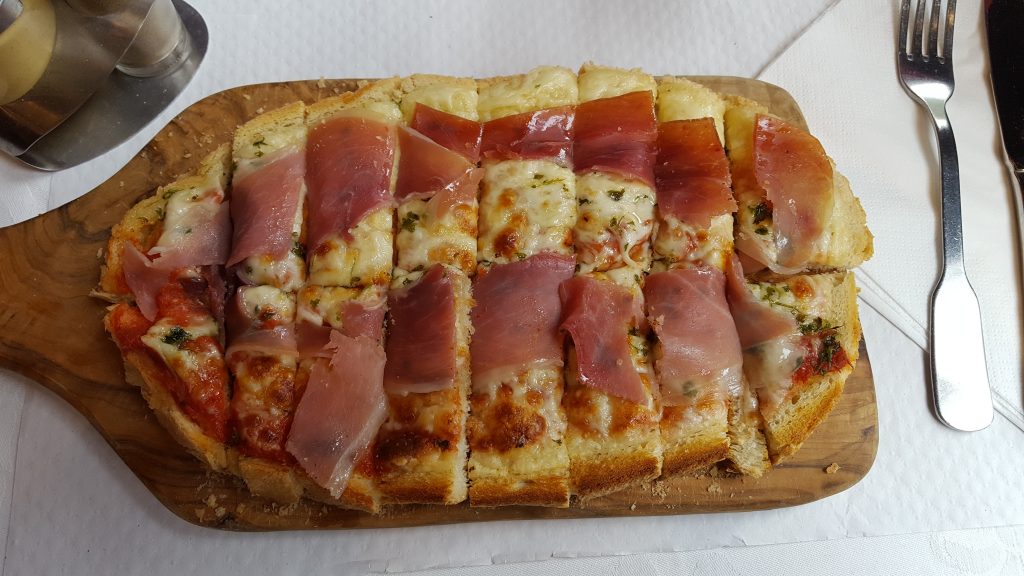 After dinner, we walked around a bit more before Jay suggested stopping at another cafe for an evening drink. We found a small cafe on a side street, sat at a table outside, and ordered a bottle of wine. It was a lovely spring evening and we enjoyed our usual people watching. After a while, we were practically alone outside and Jay turned the conversation toward our relationship and what he loves about us. Then he finally pulled out the ring and asked me to marry him : ) It was sweet and simple and just what I wanted.

When everyone found out he proposed in Paris, the first question was always “was it in front of the Eiffel Tower??” Thankfully no!! I would have been mortified to have that many people around and am so grateful he chose an off-the-beaten path place that actually reflected our style.

You may want to know, did I know he was going to propose? Well not for sure, but I had a feeling it might happen sometime on the trip. However, he acted completely normal the entire time and I never noticed the numerous times he apparently double checked that the ring was still in his carry-on! By the time we got to Paris I was wondering if I had the wrong idea.

However, I definitely didn’t want it to happen at the Eiffel Tower, so when we first got to Paris I said I “wasn’t all that interested in seeing it right away” hehe. Well, once he proposed elsewhere, then of course I wanted to go see it lit up at night : ) So, the perfect ending to the evening was standing in front of the Eiffel Tower together seeing it lit up at night and watching it twinkle at 10pm. 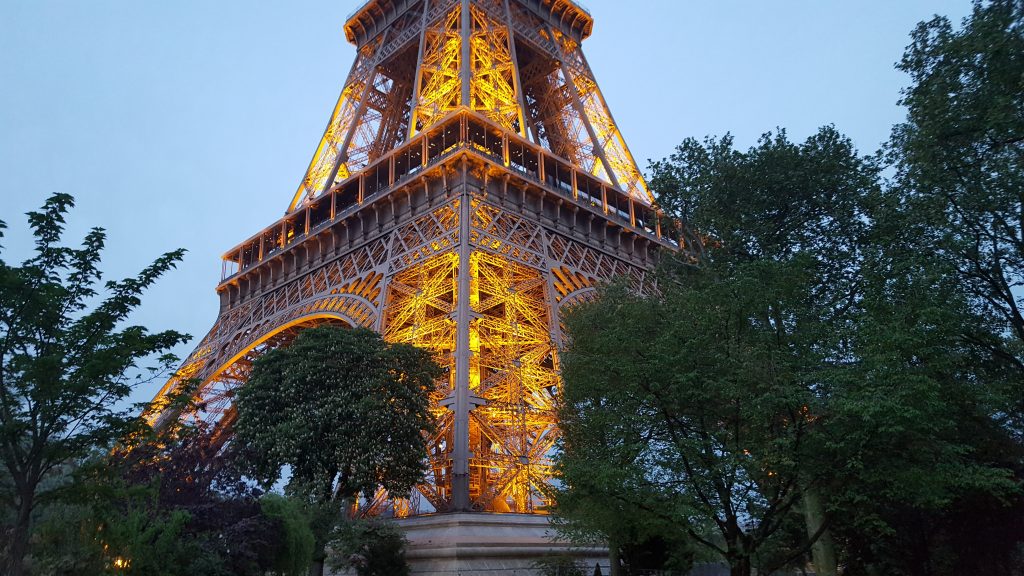 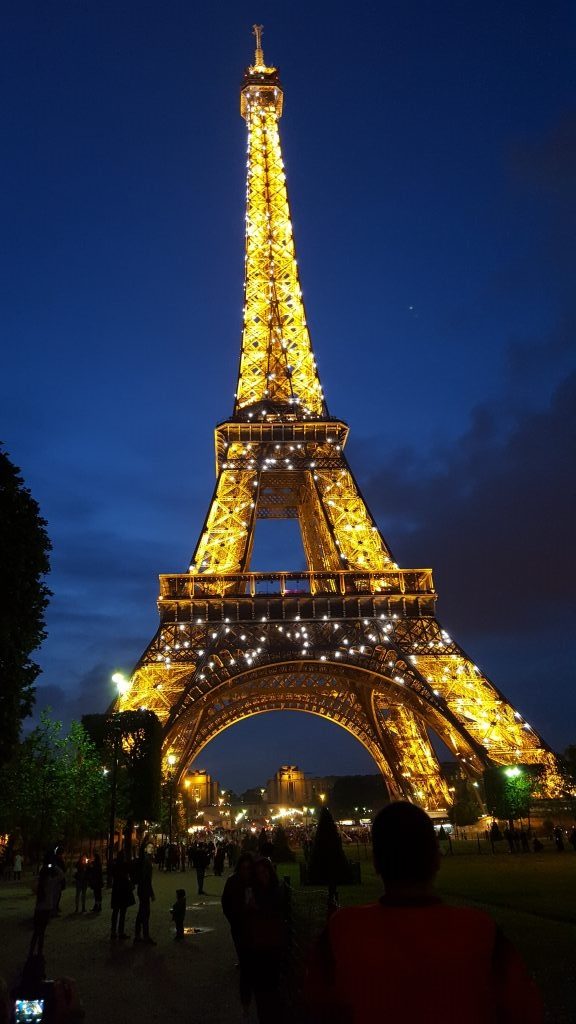 I’m wrapping up the rest of our time in Paris in Part 4. 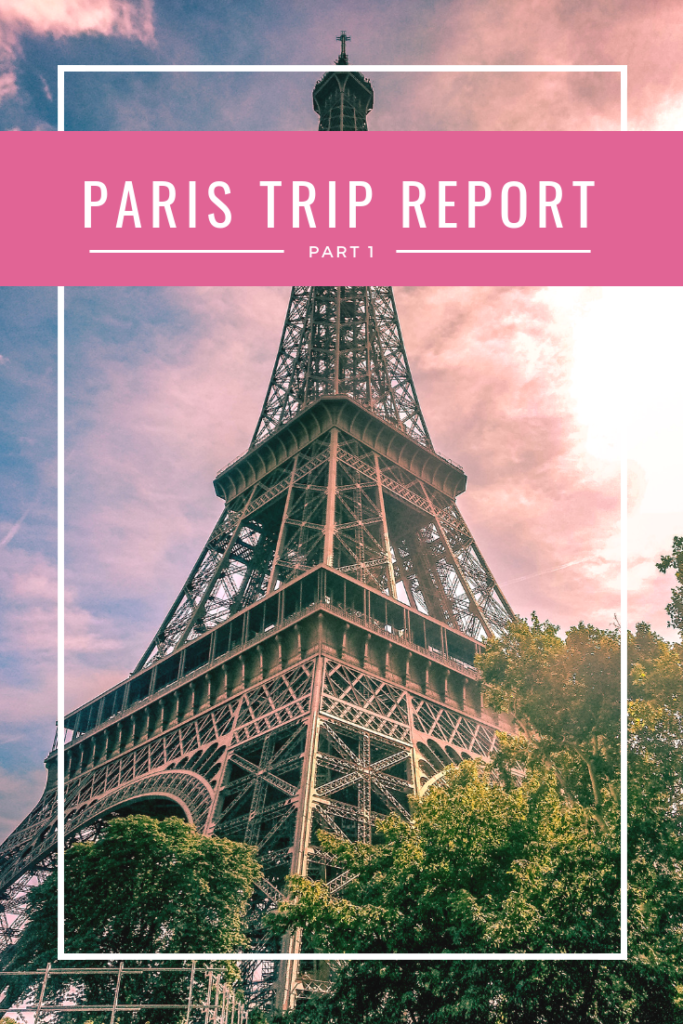